‘Mathematics seems too often to be about learning rules’ 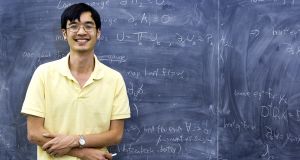 Prof Terry Tao’s Hamilton lecture will draw on his childhood fascination with astronomy and distances between planets.

Terry Tao is probably the world’s best problem solver in mathematics – the skill that is the essence of this essential creative science.

So it’s more than apposite he will be will deliver this year’s Royal Irish Academy Hamilton Lecture – in memory of probably Ireland’s greatest mathematician William Rowan Hamilton.

This year the professor of mathematics at the University of California, Los Angeles (UCLA), with three others was awarded the Princess of Asturias Award for Technical and Scientific Research for “immeasurable, ground-breaking contributions to modern theories and techniques of mathematical data and signal processing”.

In case this is considered obscure mathematics, the citation is helpful: “These constitute the foundations and backbone of the digital age (by enabling the compression of graphic files with little loss of resolution), of medical imaging and diagnosis (by enabling accurate images to be reconstructed from a small number of data) and of engineering and scientific research (by eliminating interference and background noise).”

These techniques are key to deconvolution – the improvement of resolution of images or other data by a mathematical algorithm designed to separate the information from “artefacts” which result from the method of collecting it.

This occurs with the processing of Hubble Space Telescope images taken deep in our galaxy, and in detection by LIGO Observatory in the US of gravitational waves resulting from the collision of two black holes.

The outstanding contributions of this quartet are based on two different yet complementary tools: wavelets and compressed sensing or matrix completion – the latter being Tao’s area of research.

“A second revolution in data and signal processing techniques came in the first decade of the 21st century with the development of the theories of compressed sensing... and matrix completion,” the citation adds. That is the consequence of collaboration between Tao and French mathematician Emmanuel Candès, one of the award winners.

Their work enables efficient reconstruction of scattered data based on few measurements, Tao explains. It enables the number of required samples to be reduced, which in medical imaging means being able to examine the patient faster. The benefits are obvious, especially with children, when “they cannot sit still for three minutes”.

By age 17, Tao had finished a master’s thesis, he earned his doctorate at 21 and was a tenured professor in UCLA at 24

The scanners currently used in magnetic resonance imaging (MRI) techniques use this mathematical tool – an algorithm – making it possible to shorten the patient’s scanning or exposure time and reconstruct the image without loss of quality.

He describes the moment he rang Candès, who believed he must have made a mistake, as a small amount of data had generated an almost perfect reconstruction of an image – and sought his help. The solution was complex but based on an old maths puzzle: You have 12 coins that all look exactly the same. One is counterfeit and is either heavier or lighter than the other 11. With a balance beam scale, isolate the counterfeit coin in three moves.

In their case it was millions of pixels, “some are heavy; some are light”; a much more complicated task. Tao says the outcome “is really cool”. With self-deprecation, he adds “it’s the one thing I’ve done that has any practical importance” but he couldn’t keep up with the applications emerging from it.

“The Mozart of math” nickname was, however, correctly applied to this maestro of theoretical mathematics. Tao was a child prodigy when living in south Australia. By age 17, he had finished a master’s thesis – Convolution Operators Generated by Right-Monogenic and Harmonic Kernels – and moved to Princeton University in the US. He earned his doctorate there at 21 and was a tenured professor in UCLA by the age of 24 – now 45, he describes it as the only job he ever had.

His life is compelling testimony to the good side of the global village and its ability to contribute to the betterment of humankind; in this case culminating in his immense contribution to mathematics underpinned by international collaboration.

His father, Billy – a paediatrician from Shanghai – emigrated with his wife Grace who was from Hong Kong to Adelaide in 1972, three years before Tao was born. He says he has a Chinese name he has difficulty pronouncing and was given the name Terence after his parents asked nurses in the hospital where he was born for suggestions.

Tao’s papers have been cited more than 75,000 times. He has authored 17 books and has received multiple awards, notably the Fields Medal (2006), considered to be the Nobel prize for maths. That citation notes his “beautiful work” on Horn’s conjecture, which Tao completed with a friend he had played foosball with in graduate school.

It was at a great remove from his known stamping grounds, the New York Times recalled. “This is akin,” the citation read, “to a leading English-language novelist suddenly producing the definitive Russian novel.”

Perhaps, this should not have been considered a surprise as his IQ scores range from 211 to 230 by different measures.

As Gareth Cook wrote in the New York Times (July 2015) in a vivid profile: “Within his field, Tao is best known for a proof about a remarkable set of numbers known as the primes. The primes are the whole numbers larger than 1 that can be divided evenly by only themselves and 1. Thus, the first few primes are 2, 3, 5, 7 and 11. The number 4 is not a prime because it divides evenly by 2; the number 9 fails because it can be divided by 3. Prime numbers are fundamental building blocks in mathematics. Like the chemical elements, they combine to form a universe.”

Much of Tao’s work today is related to one of the most famous unproven ideas in maths, the “twin-prime conjecture”, which the French mathematician Alphonse de Polignac proposed in 1849.

As Cook explained: “Go up the number line, circling the primes, and you may notice that sometimes a pair of primes is separated by just 2: 5 and 7, 11 and 13, 17 and 19. These are the “twin primes”, and as the journey along the number line continues, they occur less frequently.”

The key question is: are there an infinite number of twin primes? Tantalisingly, there has been much progress in recent years but no breakthrough. Infuriatingly for Tao: “I know what’s missing.”

Some problems in maths are “really, really hard”, he underlines. He describes a huge “ice wall” with no obvious way of scaling it. It seems impossible to negotiate until “there’s a breakthrough; someone finds a crack and everybody rushes through.”

How do we know the distances from the Earth to the sun and moon, from the sun to the other planets?

Unfortunately, he says, too often the subject seems to be about learning rules – what Cook described as the “how and when to apply ancient tricks to arrive at an answer. Four cookies remain in the cookie jar; the ball moves at 12.5 feet per second...”

To be a mathematician is to experiment, Tao stresses, rather than to operate within the manipulations and memorisation of second-level teaching. Too often, it’s only at undergraduate level students discover the magic spells come from somewhere and realise “you can play and tinker with them”.

He doesn’t believe Artificial Intelligence is about to supplant the mathematician, though AI has changed the way homework is assigned at undergraduate level because it can throw up reasonably good solutions so easily. Crucially, AI tools are increasingly useful but “won’t make human research obsolete”.

His Hamilton lecture will not be about his research, but stems from his fascination going back to childhood with astronomy and distances between planets – “How do we know the distances from the Earth to the sun and moon, from the sun to the other planets, and from the sun to other stars and distant galaxies?”

“You cannot take out a ruler; they are too far away,” he notes, and it was the pre-internet era then so basic mathematics and trigonometry are required. It’s about going beyond facts, asking how the planets got there, “extrapolating your senses”, and what he calls building “math on top of math”.

“Clearly we cannot measure these [distances] directly. Nevertheless there are many indirect methods of measurement, combined with basic high-school mathematics, which can allow one to get quite convincing and accurate results without the need for advanced technology – even the ancient Greeks could compute the distances from the earth to the sun and moon to moderate accuracy.”

They had no fancy tech or satellites, he adds, but they had the power of observation too; for instance, working out the Earth was round by looking at its shadow on the moon.

This was built on over centuries, and 2,000 years later we have finally worked out the size of the Universe. Critically, these methods rely on climbing a “cosmic distance ladder”, using measurements of nearby distances to then deduce estimates on distances slightly further away. He will be discussing several of the rungs in this ladder.

Tao has intimate familiarity with Hamilton’s equations, whether it’s in physics, mechanics or matrices, and his formula for quaternions, but would love to know more about his history.

The Cosmic Distance Ladder lecture by Prof Terence Tao, hosted by the Royal Irish Academy in association with IBEC and The Irish Times, takes place online at 4pm on Friday October 16th – Register for free at ria.ie/events