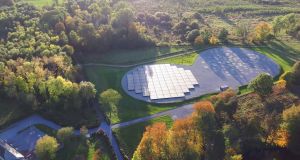 The I-LOFAR telescope was installed at Birr Castle in Co Offaly in 2017 to detect low-frequency radio waves travelling across interstellar space.

The confirmed detection of a signal from an extraterrestrial (ET) intelligence here on Earth would be one of the most important and historic moments in all of human history. It’s now possible that if and when ET calls, his call will be answered first here in Ireland.

More specifically, in Birr, Co Offaly. That’s because Birr Castle is home to a telescope built in 2017 to detect low-frequency radio waves travelling across interstellar space – the type of waves some scientists believe an ET civilisation might use to communicate.

Director of the I-LOFAR (Irish low-frequency array) telescope at Birr is Prof Peter Gallagher, head of astronomy and astrophysics at Dublin Institute for Advanced Studies. “One of the things it can do is go on surveys looking for radio signals that may not be natural; not as you might expect from a star or galaxy,” he explains.

If an artificial-looking radio signal came in, over a narrow frequency range, Gallagher says, scientists involved in the Search for Extra-Terrestrial Intelligence (SETI) would want to analyse it in detail.

“You want to look at that band and see, are there pulses in it?,” says Gallagher. “Is there a structure to it? Then you try and work out what is in that signal and try to break it down. Is it a series of zeros and ones? Or is it something logical that we could decipher?”

The first wireless radio signal was broadcast in 1898 by half-Irish inventor Guglielmo Marconi (his mother was Irish) and many of his early radio experiments took place in Ireland. Today radio is one of humanity’s key communication tools, used in radio and television broadcasting, mobile phones, wireless networks and satellites.

In the near vacuum of space, radio waves can cover vast distances travelling close to the speed of light. The first radio broadcasts for public consumption started in the United States and UK in the early 1920s and have now reached star systems close to 100 light years from the Earth.

It’s possible a curious ET civilisation is tuning right now to the BBC’s dramatic broadcasts during the 1940 Battle of Britain. Or even to the All-Ireland hurling semi-final between Kilkenny and Galway broadcast by 2RN (the precursor to Radio Éireann) on August 29th, 1926; the first European sports event broadcast live on radio.

Low-frequency radio waves – between 20 and 240 megahertz – are associated with many phenomena that astronomers and physicists want to investigate such as supernova explosions, pulsating stars, black holes and even the Big Bang. Some SETI scientists believe that these powerful waves may also be used by ET to communicate.

Given the cosmic secrets they are capable of unlocking, it’s no surprise that low-frequency-array radio telescopes have been built by research groups in many countries and locations around the world. The European LOFAR network stretches right across the entire continent from Ireland in the west to Poland in the east.

After years of underfunding, the SETI project got a massive boost in 2015. That was when the 10-year Breakthrough Listen project, a $100 million venture to be undertaken by the Berkeley SETI Research Center based at UC Berkeley and funded by the Russian entrepreneur Yuri Milner, was announced with the aim of actively searching for signals from an intelligent ET.

Breakthrough Listen approached I-LOFAR because it understood how LOFAR could be used to search for ET signals. It was particularly attractive because in Birr, unlike much of continental Europe, there is little radio-wave interference from commercial or military sources. This meant I-LOFAR was an ideal test bed for wider use of LOFAR in the SETI.

The Birr telescope is regarded as “a great asset” in the search, says Andrew Siemion, director of the SETI Research Center and principal investigator at Breakthrough Listen.

SETI computers have been installed in the I-LOFAR control room and the software is being developed with KX Systems from Newry.

KX Systems previously worked on financial software capable of analysing data quickly and making decisions based on it; attributes useful in the SETI venture. Meanwhile, in March, it was announced that Breakthrough would fund two research internships at I-LOFAR.

“We have a similar collaboration with another international LOFAR station in Sweden, at Onsala Observatory,” says Siemion. The aim is to use the Birr and Onsala telescopes, separated by 1,345km, to look at incoming signals together and rule out local interference.

The funding of Breakthrough Listen has increased optimism that a signal from ET will be found – overcoming 60 years of failure in an instant. The historic failure is, however, no surprise given that to date the SETI project has covered only a tiny fraction of what’s out there.

A weakness of SETI has been its heavy reliance on using radio telescopes to search for radio signals from an ET civilisation; even though an advanced ET society may have never used radio, or used it for only a short time. Scientists could easily detect radio signals from space, so that’s why it was done, but today the sweep of SETI has widened.

“The searches that we do are completely agnostic to the form the life takes,” explains Siemion. “The life could be carbon-based, it could be DNA-based like on Earth, it could be silicon-based and it could be some sort of computational intelligence that we might imagine based on our own experience with technology,” he says.

Prof Mike Garrett, chair of astrophysics at the University of Manchester, has been working on the SETI project for decades. He says he sometimes feels pessimistic about its chances of success, but mostly he’s optimistic this “tough problem” can be solved.

Seasoned SETI researchers such as Garrett point out that the search becomes easier as technology evolves and larger amounts of data can be processed, and with greater speed. New telescopes such as I-LOFAR, for example, can monitor large areas of the sky for signals from an ET all at once.

The use of supercomputers has also speeded up the search, while machine learning and artificial intelligence (AI) technology can be taught to accurately and rapidly pick out a radio signal of interest from all the natural background radio noise the universe produces.

So, it is perhaps unfair to criticise the SETI project for its 60 years of failure, when effective searching is only just beginning. The lack of funding for SETI over the decades, for example, forced its scientists to make hard choices, such as searching only in a few narrow wavebands.

For instance, 1,420 megahertz has been a popular frequency band to search because it’s where hydrogen, the most common element in the universe, emits radio waves as it changes energy states. The idea was that an intelligent ET would know this too and use it for that reason.

The SETI project took place outside the scientific mainstream for decades, and was associated with some flamboyant, controversial characters. This changed in recent years. One reason is the improved funding. Arguably even more important, however, has been the discovery of exoplanets beyond the solar system, some resembling the Earth.

The discovery of so many exoplanets raises a host of scientific questions that relate to SETI. Are these planets rocky? Do they have a magnetic field? Do they have an atmosphere? If they do have an atmosphere is it thick enough to protect life from UV and infrared radiation coming from the nearest star? What are the weather conditions like on the surface? Does the planet reside in the “Goldilocks zone” neither too close nor too far from its star?

These questions are driving a lot of scientific activity, which in turn is generating optimism that SETI might succeed. That an intelligent life form, on some distant exoplanet, might pick up the phone and call. And just maybe the historic call from the proverbial “little green men” will be picked up by scientists at I-LOFAR in Birr.

“I feel that exoplanets has taken us a step into the unknown,” says Gallagher. “You just wonder in our lifetimes, or in our kids’ lifetimes will there be a signal from outer space? And will that be a moment we become even smaller in the universe? It’s that kind of moon-landing moment for the next generation.”