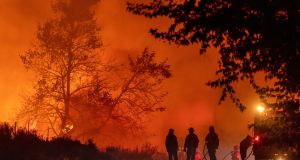 Firefighters battle the Bobcat Fire as it grows, out of control, on its northern front near Wrightwood, California, USA. Photograph: David McNew/EPA

What most disturbs best-selling science author David Wallace-Wells about climate change isn’t so much that the worst-case scenarios may come to pass. Rather, it’s how astonishingly dangerous even the so called best-case scenarios actually are.

When he began his deep dive into the science of climate change in 2016, his initial fear was that Earth was on the cusp of runaway climate change, also known as the Venus syndrome, where the planet transitioned from being capable of supporting life to a cauldron with a mean surface temperature of over 450 degrees and an atmosphere mostly comprising the heat-trapping gas, carbon dioxide.

It was with genuine relief that he came to understand that this most catastrophic of outcomes for Earth is considered extremely unlikely. However, he remains deeply shaken by the realisation that the world he had grown up in is “much more fragile than I really was willing to accept; that emotional experience stayed with me well past the time when I realised that runaway climate change wasn’t happening.”

Wallace-Wells, deputy editor of New York magazine, shot to international attention with the publication in 2017 of an apocalyptic extended essay titled The Uninhabitable Earth. It went on to become the most read article in the magazine’s history. Two years later, he expanded it into a book of the same title, which topped the New York Times bestseller list.

Intentional or not, his timing was impeccable: as the book hit the shelves, teen campaigner Greta Thunberg was fast becoming one of the most famous people on the planet, while millions of schoolchildren and Extinction Rebellion activists were flooding the streets throughout 2019 demanding immediate action on the climate crisis.

For a Bronx-born native New Yorker with no background whatever in environmentalism and cheerfully admitting to having precious little interest in the natural world, Wallace-Wells has become an unlikely, even reluctant, hero of the climate movement. His book was described as “this generation’s Silent Spring” by the Washington Post, referencing the landmark text by Rachel Carson credited with triggering the 1960s environmental awakening in the US.

He believes being an outsider has allowed him to focus more on the human threat posed by climate change. “I think part of that is also because the science is evolving in a way that does showcase the human cost more than it did 10 or 15 years ago, but I think it’s also something I’ve done to really focus on it.”

Facing the reality of a future irreparably blighted and impoverished by climate breakdown and ecosystem loss involves a wrenching psychological adjustment, perhaps even more so for those whose expectations are greatest.

“As an American I came of age at the end of the Cold War, I really was raised to believe almost like a natural iron law of history that successive generations would be wealthier and more just than the last”. These certainties are climate casualties too.

The crown of climate alarmism sits uneasily on Wallace-Wells; the fatalism it infers runs against the grain of the can-do optimism and boundless expectation of the great American middle-classes. This is evident in his analysis: “when I look at the global economic system, I do think it is theoretically possible to grow considerably while reducing our carbon emissions, even all the way to zero.”

While accepting that traditional measures of growth such as GDP are deeply flawed, he disagrees fundamentally with the de-growth movement, arguing that poorer countries need to be allowed to grow their way out of poverty. “I suppose for all my environmental radicalism, I am enough of a neoliberal to think that some of the innovations we develop in the US can be distributed to boost the developing world.”

While this aspiration is admirable, in the real world, resources are mainly mined from the global South, to the overwhelming benefit of the global North. What the world’s poor mostly get in exchange are the climate impacts.

Wallace-Wells acknowledges this when adding: “there is something of a moral crime in how much you and I and everyone we know consume, given how little is available to consume for so many other people on the planet.”

He accepts that it is already nigh-on impossible for the global climate to avoid heating by more than 2 degrees, and this points to a world with “hundreds of millions of climate refugees and, scientists tell us, tens of millions of people dying of air pollution and once-in-a-century storms becoming annual events.”

With epic firestorms currently laying waste to much of the western US and eerie orange skies reminiscent of scenes from science fiction films, climate change as an issue has finally been seared onto a political process that for years has seemed hell-bent on not engaging. When in California recently, president Trump dismissed climate concerns by blithely stating: “it’ll start getting cooler – you just watch.”

Wallace-Wells acknowledges the danger posed by Trump retaining power next month, specifically in his scuppering the “bilateral effort led by China and the US to really address this issue”. He sees this relationship as even more crucial than the Paris Agreement in terms of bending the climate curve.

He is energised by the extent to which the Biden campaign is now far more ambitious on climate action than either president Obama ever was or Hillary Clinton even contemplated. “We’re very much moving in the right direction, at a speed I literally didn’t think possible as I finished my book. It’s still hopelessly too slow, but it’s self-accelerating”, he argues. “Right now, it’s like a race between climatic tipping points and political tipping points.”

A key point of divergence between Wallace-Wells and the mainstream climate movement is his scepticism on renewable energy. “When you consider the resources we would need to make sufficient solar panels and wind turbines to power the world entirely via renewables, it’s not clear the planet even has these resources in sufficient capacity today.”

Further, he argues that even if it were possible, this would mean “real ecological devastation in parts of the world where they’re located.” The counterpoint to this is that ongoing fossil fuel extraction, apart from its climate impacts, also leaves deep ecological scars around the world.

As a writer and father of a young daughter, the past four years of awakening to the climate crisis has been life-changing for Wallace-Wells. Writing about it has, he feels, been cathartic, allowing him to “channel my anxieties towards something”.

He feels a combination of journalistic training and temperament “has helped me cauterise myself against some of the more terrifying and alienating aspects of the material I’ve studied.” Notwithstanding this effort at distancing, he adds: “even so, it’s impossible to do it entirely and impossible to regard even a best case future as anything other than a human tragedy.”

While he sees evidence of more and more people awakening to the climate crisis, Wallace-Wells remains adamant that “many more people are fatally complacent than are really panicking.” We have, he notes, “already today brought the planet entirely outside the window of temperatures that enclose all of human history…I often think of it like we’ve landed on a new planet.”

It has long been an article of faith in the environmental realm that once things started to get really bad, global action would rapidly scale up. Yet, our capacity to normalise and the “shifting baseline syndrome” mean public shock at the latest disaster is quickly internalised and forgotten. We now need, Wallace-Wells concludes, “to also normalise climate alarm, because we have every reason to be alarmed.”

1 The real Contagion virus is out there and it’s causing virologists to worry
2 US election: ‘Trump would not be caught dead here unless he wanted our votes’
3 First full moon on Halloween night since 1955 will be rare ‘blue moon’
4 Five nursing homes receiving ‘intensive’ State support as they battle serious coronavirus outbreaks
5 Man found guilty of murdering girlfriend during drinking session
Real news has value SUBSCRIBE