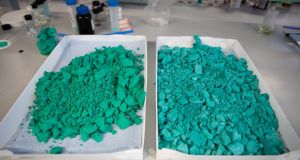 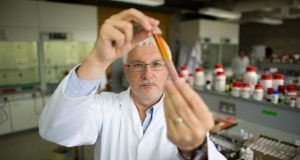 A material developed at University of Limerick “could help solve the global water crisis” by producing water from air, even in the most hostile of locations, researchers say.

The crystalline material, known as ROS-037, has been developed after decades of research by Prof Michael Zaworotko, a Science Foundation Ireland research professor at UL’s Bernal Institute.

Prof Zaworotko says the material is so efficient that it could extract water in the atmosphere over deserts and help grow crops in these environments.

He said the material has such favourable properties for absorbing and releasing water that it “could revolutionise both dehumidification systems in buildings and availability of water in regions of drought”.

It has been developed as a commercially viable “nanomaterial” – a crystal made up by tiny repeating units – by Molecule RND Ltd, an international research group and incubator fund that has relocated to UL to work with Prof Zaworotko’s team.

In practice, the low energy desiccant, essentially a material that can capture water, could replace the silica traditionally used in dehumidification systems in buildings, Prof Zaworotko explained.

“Silica has been used for a long time as a desiccant to pull water from the atmosphere, but it is not very efficient. If we replaced silica with this crystalline material, it would require substantially less energy to maintain air quality in buildings around the world,” he added.

“Even in zones of very low humidity on Earth, even in deserts, there is still some water in the atmosphere. This material could be applied to capture the water from the air, meaning you could potentially grow crops there.”

He added: “Without water, there is no life, no Plan B. About one third of the world’s population does not have access to pure water and this technology helps to solve that problem.”

Molecule Ltd said the technology could “transform dehumidifiers into medical-grade water generators” that could solve the “global city heat island effect”, where vast amounts of heat are trapped in cities posing health and environmental risks –while enabling office buildings to produce their own water from air.

The material operates exactly like inorganic desiccants used today, but regenerates at 49 degrees instead of 204 degrees, which drastically reduces the energy used by existing dehumidifier equipment.

“We approached Mike to develop a material for us that could help solve the global water crisis,” said Molecule’s chief technology officer Kurt Francis. “Our teams meshed to bridge the gap between academic scientific research with real world product development, engineering and business development.”

Dehumidifiers make up a huge global industry and are found wherever air management is needed, in everything from office buildings to pharmaceuticals to dairy production.

“What’s been holding them back is they’re inefficient due to the heat required to dry out the water vapour during the regeneration cycle. This technology solves that problem. As a result, you can curb your emissions and energy costs immediately,” he noted.

Molecule’s chief executive Bjorn Simundson said: “What I find amazing is that we seem to have found a way to transform normal HVAC [heating, ventilation and air conditioning] equipment already on rooftops around the world to become a new source of incredibly clean water and curb their energy use at the same time.”

He said the new material “has the capacity to transform global power consumption and provide a new source of pure water, even in dry climates”.

Molecule has orders for the first available commercial units with a prototype water generator delivering water with low impurity without any filtration.