Maths and poetry: Beauty is the link

For both mathematics and poetry, the ‘less is more’ principle often applies 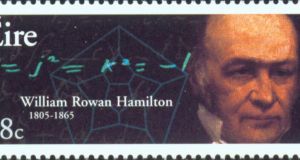 Mathematicians are not renowned for their ability to reach the deepest recesses of the human soul. This talent is usually associated with great artists and musicians, and a good poet can move us profoundly with a few well-chosen words.

William Rowan Hamilton, whose work we celebrate during Maths Week, was an innovative mathematician and physicist of the highest order. One of his brilliant ideas was that the unfortunately-named imaginary numbers – in truth, no less real than any other numbers – could be regarded as the second elements of pairs of real numbers, with clearly defined arithmetic rules for manipulating them. With this insight, he banished a mystery that had overshadowed mathematics for centuries.

Hamilton did not confine his thoughts to mathematics. In a lecture on astronomy in 1832, he spoke of the strong resemblance between poetry and science, of the enthusiasm that both can inspire, and of the power that both possess “to lift the mind above the dull stir of Earth”. His poetic output was impressive more for its volume than its quality. Perhaps it was fortunate that another William, his friend the aptly-named Wordsworth, firmly advised him to stick to mathematics, lest his rhyming seduced him from the path of science that he seemed destined to tread.

What is the connection between poetry and maths? Mathematics – using numbers, shapes, etc – deals in abstractions, while poetry uses words and deals in emotions. Pulitzer Prize winner Edna St Vincent Millay, one of the most respected American poets, gave a clue in her sonnet, “Euclid alone has looked on Beauty bare”. While pattern and structure are important for both mathematics and poetry, the crucial link is beauty.

The English mathematician G H Hardy also observed that a mathematician, like a poet, is a maker of patterns. If his patterns are more permanent than those of the poet, it is because they are made with ideas. But the mathematician’s patterns, like the poet’s must be beautiful if they are to have any lasting value. Beauty is the key.

Einstein remarked that pure mathematics is, in its way, the poetry of logical ideas. More bitingly, David Hilbert, upon hearing that one of his students had dropped maths to study poetry, said “Good, he did not have enough imagination to become a mathematician.”

For both mathematics and poetry, a homeopathic principle that “less is more” often applies. Mathematicians and poets each strive for economy and precision, selecting exactly the ideas or the words that they need to convey their meaning. Both activities are expressions of creativity, emanations of the human spirit. American mathematician and educator David Eugene Smith observed that mathematics is the poetry of the mind while poetry is the mathematics of the heart.

Bertrand Russell wrote of pure mathematics having a beauty cold and austere, capable of a stern perfection like that of great art. Mathematics, with its abstractions, is usually less accessible than poetry, although some modern poetry is shrouded in obscurity, with arcane words and forms that compete for impenetrability with a mathematical argument.

The beauty, if it is there, is often well hidden and patience is needed to appreciate it. Maryam Mirzakhani, the first woman to win a Fields Medal – the Nobel Prize of maths – wrote that the beauty of mathematics only shows itself to more patient followers.