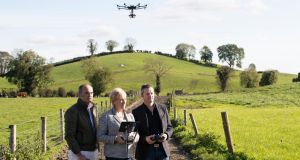 The drone could be as common “as the quadbike or the sheep dog” on Irish farms in the years ahead to help cut the workload facing farmers, according to a robotics expert.

Current restrictions on the use of drones, however, are hampering their widespread introduction on to farms, said Maynooth University robotics expert, Dr Tim McCarthy

Speaking after a drone demonstration on a farm near Carrickmacross, Co Monaghan, Dr McCarthy said “drones and other autonomous technologies offer huge societal and economic opportunities to Ireland”.

The Maynooth University team led by Dr McCarthy is one of six that will share €25 million under Science Foundation Ireland funding announced by Minister for Business, Enterprise and Innovation Heather Humphreys.

Drones operating together with satellites and GPS technology will help farmers to practise “precision agriculture”, the Minister said, cutting costs and protecting the environment.

On Mark Wilson’s farm in Cormoy Lower in Carrickmacross, drones enable him to deploy thermal sensors to track cattle, including offering warnings about whether any of them are in difficulty.

Drones monitor the growth of grass and crops on the Wilson farm, too, and measure biomass yields that are important in dairying. Equally, they can detect crop infestations without the need to inspect the crop by hand.

Ireland is a leading country in developing the technology, though drones can only be used when the operator has line of sight, which is limited to 300m, similar to other jurisdictions.

The Maynooth team is developing an air traffic system for drones which would allow operators to use them beyond the line-of-sight restriction, thus unlocking the potential.

“We are only beginning to see the practical applications this technology can provide,” said the Maynooth academic, adding that the SFI grants will help a “very real national capacity” in drone technology.

1 No time limits and no pre-booking: what the unpublished pub reopening guidelines reveal
2 Teenage boy dies at Powerscourt Waterfall in Co Wicklow
3 Gardaí surrender 13 people to Polish police
4 Fresh investigation into the murder of Michaela McAreavey in Mauritius
5 Ex-solicitors charged with fraud over theft of six-figure sum from banks over 18 months
Real news has value SUBSCRIBE