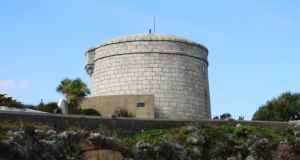 The Joyce tower in Sandycove, Co Dublin, from which Stephen Dedalus began his odyssey in ‘Ulysses’.

As Bloomsday approaches, there is merit in reflecting on James Joyce’s relationship with mathematics. He entered UCD in September 1898. His examination marks are recorded in the archives of the National University of Ireland, and summarised in a table in Richard Ellmann’s biography of Joyce. The marks fluctuate widely, suggesting some lack of focus and dedication. In his matriculation year, Joyce managed only an abysmal 22 per cent in maths. The following year he got an impressive 60 per cent. In his third year he dropped mathematics but studied logic, achieving only a miserable 27 per cent.

For his finals in 1902, Joyce took English, French and Italian. One might have expected a spectacular performance in English, but he was awarded only 43 per cent, well below his best effort in maths. Ellmann remarked that Joyce had done well enough to pass but had not bothered to excel – definitely a case of “could do better”.

As a result of his university studies, Joyce was familiar – at least in outline – with a wide range of concepts in higher mathematics. He makes reference to irrational numbers, infinite series, continued fractions and limits. He was intrigued with the concept of limit, and this theme occurs repeatedly in Ulysses. However, most mathematical references are oblique and frequently abstruse. Joyce drew upon his sketchy knowledge for narrative detail and literary colour.

In the opening scene of Ulysses, at the Martello tower in Sandycove, an old lady sums up the cost of milk delivered to the three residents: “Well, it’s seven mornings a pint at twopence is seven twos is a shilling and twopence over and these three mornings a quart at fourpence is three quarts is a shilling and one and two is two and two, sir.” To readers who remember the old pounds, shillings and pence, with 12 pence to a shilling, this can be decoded easily enough. But as time passes, the meaning becomes more obscure.

Another mystifying example is found in the Sirens episode, where Bloom’s internal monologue goes thus: “Numbers it is. All music when you come to think. Two multiplied by two divided by half is twice one.” This makes sense if we take “divided by half” to mean halved. He continues: “Vibrations: chords those are. One plus two plus six is seven. Do anything you like with figures juggling. Always find out this equal to that . . .”. How can we have 1+2+6 = 7? These numbers actually represent musical intervals, which are counted inclusively. So, the interval from do to do itself is a unison (count of one), from do to re is a second (count of two) and from re to ti is a sixth (count six). Combining the three intervals brings us from do to ti, a seventh (count of seven).

Bloom had a keen interest in the problem of squaring the circle. There are several references in Ulysses to this. Bloom had planned to devote the summer of 1886 to solve this problem “and win that million”. In fact, there was no such award and the problem had already been resolved in the negative: it is impossible to square a circle using only Euclidean methods. Curiously, seven awards of a million dollars were offered in the year 2000 for the solution of seven mathematical problems; proofs of six of these are still outstanding.

Peter Lynch is emeritus professor at UCD School of Mathematics and Statistics – He blogs at thatsmaths.com