Time is running out for Lough Carra 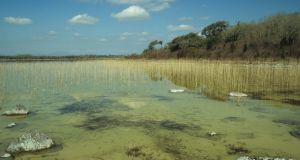 The 'pale pellucid green' of Lough Carra was remarked upon in 1906 by Ireland’s most famous botanist Robert Praeger. Things have changed since then due to nutrient enrichment. Photograph: Lynda Huxley

Two yellow brimstone butterflies led us down to the shore at the northeast end of Lough Carra in Co Mayo. As if on cue, the sun came out just as we reached the water’s edge. This part of the lake at least bore some resemblance to the “pale pellucid green” remarked upon by Ireland’s most famous botanist Robert Praeger in 1906, when he studied its unique habitats. But all is not as it was in Praeger’s day.

Just then ecologist Chris Huxley picked a small green floating object out of the water. In my hand it looked and felt like a squidgy misshaped grape. It was an ophrydium, a colonial protozoic animal. “It should be white,” he says. “It’s yet another sign that there are too many nutrients in the lake.”

Lough Carra is what is known as a marl lake, a shallow limestone lake that is an outlier of the Burren. The state of the marl, which forms the lakebed, is a metaphor for the state of the lake itself. Lough Carra, it turns out, has its own inbuilt warning system, one that has been sounding loud and clear for years.

Earlier, Huxley had brought me to Castle Burke, where the wind whipped the murky brown lake waters and there was zero visibility.

“The water used to be so clear here that you could see an eel swimming on the bottom,” he says. “The marl used to be white, which is what it should be, but now you’ll find it’s green. In some places it’s brown, or even black.”

Snorkelling scientist Dr Cillian Roden has spent weeks face down in Lough Carra studying its flora and fauna, particularly the role of charophytes; very primitive plants, which thrive in low-nutrient clear water and whose presence or absence at certain depths is a superb indicator of water quality. They also absorb nutrients that would otherwise be taken up by pondweed, clouding the lake.

Roden concluded Lough Carra is under “considerable ecological stress, and the assumption it is Ireland’s best example of a marl lake may cease to be true in the near future”.

Roden also points out marl lakes can buffer phosphorus enrichment for some time. In other words the marl has been masking the fact that there are too many nutrients entering the lake, from fertiliser, slurry run-off and other sources. If the marl stops absorbing them, the lake’s problems will likely increase.

“If you get to a point where the marl no longer absorbs phosphates, a reduction in oxygen can actually cause the phosphorus that’s held in the marl to be released,” says Dr Ken Irvine, of the IHE Delft Institute of Water Education, who carried out many studies on Carra while at Trinity College. He warns the lake’s ecological status could then tip over. “You can go from a clear lake to a turbid lake quite quickly, which is what we’ve seen happen in the UK.”

Despite the concerns raised by scientists, Lough Carra was one of the few lakes in Ireland to be considered “high” status under the Water Framework Directive. Yet a letter from the EPA to former taoiseach Enda Kenny in 2016 (following representations from Huxley) shows the agency was in fact well aware of the problems at the lake. It was also aware of studies by Trinity College, the National Parks and Wildlife Service and others, and the fact that its own standardised monitoring system didn’t take the special nature of Lough Carra’s ecology into account.

The lake’s status has since been revised to “good”, and its risk status is now under review. According to the EPA, by categorising Lough Carra as “review” the agency has determined it needs to further assess pressures and their impacts on the lake to determine if they will cause its quality to decline over time.

The reclassification of the lake has certainly help galvanise local attention, but those who have come together to form the Lough Carra Catchment Association are not convinced that more evidence is required before action is taken.

“What we’re about here is saving Lough Carra,” said retired school principal Tom Burke, as he opened its first meeting. His first question was: “Do we need more science?” It was a good point: Lough Carra, part of the Great Western Lakes system, which includes Loughs Corrib and Mask, is probably the most studied lake in Ireland.

The two scientists at the meeting, Huxley and Roden, were in no doubt; there is enough science to know what is happening, and what is causing it. But Burke needed all his diplomatic skills to navigate the assembled anglers, farmers and representatives of State agencies.

The elephant in the room was intensification of agriculture and associated pollution, and there was palpable concern about antagonising farmers whose co-operation will be vital to solving the problem.

The issue of drinking water quality has helped to focus minds. “These are not just pretty lakes, says Roden. “They are a vast resource of pure water, which we used to be able to drink straight from the lake.”

One of the smaller group water schemes drawing from Lough Carra is on a long-term boil-water notice due to the presence of cryotospiridium. Mayo County Council’s action point for the scheme at Robeen is described as “further investigation into improvement at source” – cryptosporidium is often caused by animal faeces.

Fianna Fáil councillor Al McDonnell, who has joined the catchment association, is also a fly fisherman, and has watched this wild trout fishery deteriorate over the past two decades. In earlier years he was reluctant to zone in on the role of farming, but says people are more willing to acknowledge it now.

Despite these concerns, the recently-published national River Basin Management Plan contains no specific measures for Lough Carra. It is just one of 190 areas for action which have been prioritised nationally for particular attention between 2018 and 2021.

According to Carol McCarthy, project lead for the newly-established Local Authorities Water Support and Advice Team, there will be “boots on the ground in the Mayo catchments by early next year to validate the science that has already been done and make recommendations for action”. Yet there is no timeline for when this project will reach Lough Carra. Huxley had made a submission to the plan asking for the lake to be treated as a special case.

“Lough Carra should be designated as a top priority pilot project for special catchment management, with suitable incentives for positive agricultural action and disincentives for negative activities.”

Roden and Irvine believe we need to crack open the debate about land use in Ireland, about intensification, and what that means for our natural resources, particularly our water.

“If you plan to increase dairy output, as the Government is doing, how many lakes will you destroy in doing it?” says Roden. “We’re exchanging extra output for a chewed up landscape, using non-renewable inputs. It’s a bad bargain.”

“I’ve worked on lakes all over Europe, ” says Irvine, “Lough Carra is unique, and needs urgent protection. Restoration isn’t easy, and is often impossible. You need to protect what you’ve got.”