It’s fishy: rise in warm-water species found off our coasts 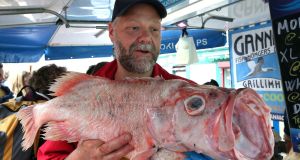 Fishmonger Stefan Griesbach with a golden redfish at his stall at the Saturday market in Galway city. Photograph: Joe O’Shaughnessy

“Phenomenal” numbers of mauve stingers on the west coast and more frequent sightings of lion’s mane and Portuguese men-o-war in Irish waters made for a busy autumn for jellyfish expert Tom Doyle.

Dr Doyle, of NUI Galway, says he is often asked if this is evidence of global warming but he believes the situation is too complex to draw conclusions.

That complexity is illustrated by a study published last September (2017) in the journal Science by biologists from the US Smithsonian environmental research centre and others which found that plastic debris in the oceans was transporting creatures across the globe.

The scientists recorded nearly 300 species arriving alive in North America from Japan between 2012 and 2017.

Just over three years ago, a report card by Irish and British scientists on marine life noted that anchovies, Chilean oysters, little egrets and striped dolphins were tending to be found further north.

The 150 scientists involved in the Marine Climate Change Impacts Partnership also noted that a warm water-loving honeycomb worm, which forms reefs that can provide “natural” coastal defences, could also be multiplying in these waters.

The report did note that the coastal sea surface temperature in the region was lower between 2008 and 2012 than between 2003 and 2007, but attributed this to “short-term variability”.

It said marine temperature records continue to show an overall upward trend, with Arctic sea-ice retreating and becoming thinner between 2007 and 2013.

There was global confirmation of this trend in the scientific journal Nature in 2013. A study led by William Cheung found that ocean warming had already affected global fisheries in the past four decades. It called for action to help coastal communities adapt to such changes, especially in tropical regions.

Dr Doyle and his NUIG colleague Anne Marie Power, who lectures in marine zoology, believe it would take several decades of data recording before firm conclusions could be drawn and links made in relation to the changing environment here.

Dr Power notes that the seasonality of plankton blooming in Irish waters has altered. Her work has shown a clear move towards earlier blooms of copepods or small crustaceans, some of which are planktonic, on the Irish Shelf and “off-shelf” waters.

Rocky-shore organisms, such as warm- and cold-loving barnacle species, are very good indicators of warming seas, Dr Power says. Yet a 45-year study from 1958 to 2003 of the rocky-shore community as a whole, including algae, did not show a “clear fingerprint” of warming, she says.

Peter Tyndall, who has spent a lifetime at sea as a fishing tear technologist with Bord Iascaigh Mhara (BIM), received reports last summer of slipper lobsters in Galway Bay, and “trigger fish coming north in such large numbers that they were biting the legs off lobsters in pots”.

“The crab spawning time seems to be changing, and then we also have had a great run of wild salmon in the Corrib this year,” he notes.

Fishermen have long believed that warming waters have forced cod further north – and that a decline in stocks further south is not just due to overfishing.

“Oceanographers are also noting that the a body of warm water from the north Atlantic drift is swinging up towards Iceland, and that this increase in mackerel off Iceland may therefore be cyclical, rather than long term,” Dr Tyndall cautions.

Rare-fish expert Kevin Flannery in Dingle, Co Kerry, says the Blasket island pot fishermen have reported Leopard moray eels, or “Dragon moray”, and he has also seen increases in bream from the Mediterranean and trigger fish.

He believes that attributing climate change alone to species like declining Atlantic wild salmon may be too simplistic. Industrial fishing of cold-water shrimp by Danish interests off Greenland is having a serious impact on salmon feeding grounds, he says.

“The wild salmon returning are often in a poor state, and then prone to sea lice, but they are starving by the time they get back here,” he says.

Dr Power says that while Ireland is “geographically very interesting”, with both Lusitanian or southern and cold-water species in these waters, activity is too small here to reflect global trends in distribution shifts.

“Climate change is happening on a large scale, and so ocean studies have to be large scale also for conclusions to be drawn,”she says. “Generally, evidence for impacts of global warming in marine habitats lags behind terrestrial evidence.”

Partly this is because of the lower numbers of marine scientists, even within the intergovernmental panel on climate change which produces the data for the international summits.

When a rare golden redfish was caught by an Irish fishing vessel on the Porcupine Bank almost four years ago, it wasn’t looking for a balmy environment.

The long-living Sebastes norvegicus, is prevalent in Iceland, and can be found along the North American coast, south of Greenland and along the Norwegian coast.

The 5.9kg specimen was caught by Aran islander Tomás Conneely of the prawn trawler Ocean Harvester II, based in Ros a Mhíl, Co Galway.

Declan Quigley of Mara Beo/Dingle Oceanworld in Co Kerry observes that the cold-water species swims at depths of 100 to 1,000 metres , and can live for 60 years and weigh up to 15kg.

A specimen was reported from Isle of Man waters in the Irish Sea in 1927, and seven juveniles, which may have travelled in larvae dispersed from more northern latitudes, were authenticated between 1968 and 1978 in the Dingle Bay area.

A French trawler caught a female golden redfish off the Irish northwest coast in 2005.

Both Dr Quigley and Kevin Flannery have worked tirelessly to record rare marine visitors for the Irish Naturalists’ Journal, but Dr Peter Tyndall believes the State needs to do more to support their work, and that of interested skippers who share a passion for the future of the marine environment.

Dr Tyndall believes it is time for an accessible and dedicated national data system for fishermen to record observations, because “they are at sea daily, whereas research ships are only out for specific periods”.