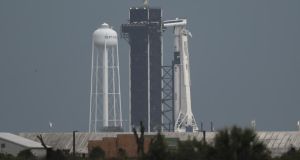 The SpaceX Falcon 9 rocket with the Crew Dragon spacecraft attached sits on launch pad 39A at the Kennedy Space Center on May 27th in Cape Canaveral, Florida ahead of its planned launch. Photograph: Joe Raedle/Getty

Billionaire Elon Musk’s SpaceX rocket launch has been postponed due to bad weather in Florida.

The plan had been to launch two Americans into orbit from Florida, a mission that would mark the first spaceflight of NASA astronauts from US soil in nine years.

But the countdown was halted less than 17 minutes before the SpaceX Falcon 9 rocket was due to lift off from the Kennedy Space Center, propelling Doug Hurley and Bob Behnken on a 19-hour ride aboard the private rocket company’s newly designed Crew Dragon capsule bound for the International Space Station (ISS).

Irish skywatchers had hoped to be in with a chance to get a brief glimpse of the rocket shortly after it left terra firma on the other side of the Atlantic.

SpaceX was set make history by being the first privately funded spaceship to launch humans into orbit. The next launch window is this Saturday, May 30th.

Standing down from launch today due to unfavorable weather in the flight path. Our next launch opportunity is Saturday, May 30 at 3:22 p.m. EDT, or 19:22 UTC

The plan was the culmination of 10 years of development by Mr Musk, the Californian billionaire who is chief executive of Tesla and the founder of the SpaceX aerospace manufacturer and space transport services company.

US president Donald Trump and his wife Melania had planned to view the launch.

It had been expected the rocket would be visible at 9.53pm to the left of the rising moon in Irish skies and near the horizon. However, astronomer John Flannery had previously stressed binoculars and clear conditions would be needed.

The Crew Dragon was due to arrive at the ISS 19 hours after launch. It would have marked the first time since 2011 that the US has had the capacity to launch its own people into space since the demise of the space shuttle.

The launch would have marked a significant new departure in the history of space exploration which to date has been left almost exclusively to nation states who have the vast resources to pay for it.

“We are on the cusp of launching American astronauts on American rockets from American soil yet again,” said Nasa administrator Jim Bridenstine earlier on Wednesday. He referred to the planned launch as “the big show”.

“This time we’re doing it differently than we’ve ever done it before. Nasa is not going to purchase, own and operate the hardware the way we used to. We are partnering with commercial industry with the intent that they would go get customers that are not Nasa, drive down our costs and increase the access to space.”

The goal is for the public and private sectors to coalesce in the coming decades to return humans to the moon and then go on to Mars in the middle of the next decade.

Also speaking before the postponement, Astronomy Ireland chairman David Moore said the launch would be the “most historic sight most people will see in their lifetimes as history will record this flight as the first step in the colonisation of space”. - Additional reporting Reuters