Cash haul of €700,000 linked to veteran trafficker 'The Penguin' 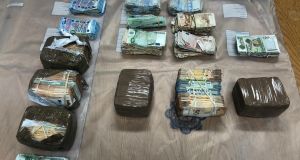 Gardaí believe a consignment of €700,000 in cash seized in a major gangland operation on Tuesday is owned by the veteran Irish drugs trafficker George Mitchell, also known as “The Penguin”.

Mitchell’s drug-dealing and robbery had helped him amass a considerable fortune by 1996 when he chose to exile himself from Ireland after the John Gilligan drugs gang murdered the journalist Veronica Guerin.

He was based for many years in Amsterdam, from where he continued to supply drugs into the Irish market and other countries, and where his son-in-law Derek Dunne was murdered in 2000.

On Tuesday at about 6pm, officers from the Garda National Drugs and Organised Crime Bureau (GNDOCB) intercepted a vehicle on Collins Avenue, Dublin 9, and seized about €400,000 in cash.

Two suspects, aged 53 and 29 years, were arrested and take for questioning to Raheny and Clontarf Garda stations. One of the men, a north Dublin resident, is very close to Mitchell, and is suspected as working as Mitchell’s bagman in Ireland by handling the money generated through drug sales in the Republic.

Follow-up searches were carried out at several premises in Dublin and Meath where a further consignment of cash, of €300,000, was made, bringing to €700,000 the total amount of cash seized.

A quantity of drugs including cocaine and MDMA, valued at about €30,000, was also seized. A 22-year-old man was arrested in relation to the drugs seizure and taken to Ballymun Garda station, north Dublin, for questioning.

Assistant Commissioner John O Driscoll said the operation was an example of the policing that was continuing to disrupt drugs gangs despite the policing operation underway to enforcement Covid-19 measures.

“The seizure yesterday by the Garda National Drugs and Organised Crime Bureau of cash, believed to be associated with organised crime, to an estimated value of €700,000, bringing to over €2 million the amount of cash seized by GNDOCB so far this year, is an important achievement designed to impact significantly on particular organised crime groups.”

Dubliner Mitchell fled Ireland in 1996 to escape the Garda crackdown on organised crime gangs in the aftermath of the Ms Guerin’s murder and also to ensure his wealth could not be confiscated by the Criminal Assets Bureau (Cab), which was established in the wake of the crime journalist’s gun killing.

Around the same time he left the Republic his name appeared on a purported IRA death list, which is said to have influenced his decision to leave. He initially moved between Amsterdam and The Hague and presented himself as a businessman.

Gardaí believe that by the time he relocated to Holland Mitchell had amassed a fortune through armed robbery and drug dealing.

He had previously been close to both the Kinahan and Hutch gangs but has avoided becoming involved in any gang feuds and from Continental Europe, mainly Amsterdam, he has continued to run a drugs business while mostly avoiding the gun feuds that have characterised Irish gangland crime over the past 20 years.

Within two years of fleeing Ireland he was charged with a major robbery in the Netherlands in March 1998, when £5 million computer supplies were stolen from an Irish truck there.

In July, 2000, while Mitchell was awaiting trial in the Netherlands, Cab secured a High Court judgment for more than £100,000 for VAT and interest against him.

Mitchell who was aged 47 years at the time and had an address at Woodfarm Acres, Palmerstown, Co Dublin, was described during his trial in Holland as the criminal mastermind behind a plot to steal the £5 million consignment from a lorry en route from the Co Kildare plant of Hewlett Packard to a Dutch customer.

At his trial, Mitchell described himself as a respectable director of an import-export business based in the Netherlands. He also claimed he had been set up by the Garda.

However, judges ruled that the Irish operation leading to his arrest, and that of the lorry driver, was legal. They ruled that Mitchell was the ringleader in the plan and he was sentenced to 30 months in prison.

He has spent the last two decades since his term of imprisonment in Continental Europe, travelling and living between Switzerland, the Netherlands, Spain and other countries.