Austrian physicist who fled to Dublin delivered famous ‘What is Life?’ lecture 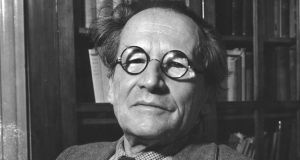 Erwin Schrödinger came to Ireland in September 1939 as a refugee who travelled across England to Dublin.

The title of the lecture “What is Life?”, was disarming in its simplicity but it was to prove to be profound in its impact. Austrian physicist Erwin Schrödinger, who had fled from Nazi Germany, was about to turn the world of biological research on its head.

His paper, delivered in the Physics Theatre of Trinity College Dublin – 75 years ago on Monday – is regarded as Ireland’s greatest contribution to modern science.

It was part of a series of three “statutory public lectures” that by 1944 became a book. After reading it, James Watson was inspired to answer the question, and went on with others to decipher the genetic code of life – the Double Helix – in 1953.

Schrödinger delivered his talk as head of school and professor of Dublin Institute of Advanced Studies, which has marked the anniversary by releasing a series of photographs and newspaper clippings from his time at DIAS.

It was to inspire a generation of scientists in search of the building blocks of life but Schrödinger’s imprint was even more immense. He straddled quantum theory, biology and even philosophy. This was because questions raised by new quantum realities – courtesy of him and Albert Einstein – radically challenged taken-for-granted accounts of everyday life and being.

His German passport marked him as an enemy alien, but a letter from Éamon de Valera ensured him and his family safe passage.

As taoiseach, de Valera – a mathematician of note in his own right – founded the DIAS in 1940 and invited the Nobel-winning physicist over to join it.

Laboratory research, de Valera remarked, “would require equipment altogether beyond our means” but to excel in theoretical physics “all you want is an adequate library, the brains and the men, and just paper”.

The audience of 400 people at that first lecture ranged from invited schoolchildren, to de Valera (who took notes) and his Cabinet. The Irish Times reported on the event in a short single column story. Time magazine also covered the series.

Schrödinger told the audience “the whole subject” must be approached in the light of one question: “How can the events in space and time which take place within the boundary of an organism be accounted for by physics and chemistry?”

After he left in 1955, Schrödinger noted it was “almost shameful” how much peace he had to get on with his work in Ireland, a country that began as a place of exile and eventually became a sanctuary. He added sardonically, “Sometimes we would quietly say amongst ourselves: ‘We owe it to our Führer’.”

Watson was to observe during a visit to Ireland in 2015: “In a way Éamon de Valera made me.” Referring to What is Life? he added: “I realised it was very important and it was the book that turned me towards biology.”

DIAS CEO and registrar Dr Eucharia Meehan said the institute was immensely proud to have had Schrödinger as the first director of DIAS’s School of Theoretical Physics.

“DIAS is home to a rich treasure trove of historical artefacts from Schrödinger’s time in Dublin. Along with lots of fascinating photographs of Schrödinger with Éamon de Valera, we have a letter to Schrödinger from Francis Crick crediting ‘What is Life?’ as an influence in his and James Watson’s discovery of DNA.”

School of Theoretical Physics director Prof Werner Nahm said: “Schrödinger’s lecture series not only brought a broad range of theoretical physics concepts to the non-expert but have also been widely credited with inspiring the discovery and decoding of DNA, our genetic building blocks.”

His legacy lives on, helped by “Schrödinger’s Cat”, which featured in his famous thought experiment that quantum physicists have long wrestled with; an imagined feline that can be dead and alive at the same time.