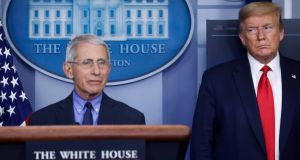 Too often good science is countered by ignorance. This is evident in the US, where objectivity has become a matter of opinion. The plight of the federal government’s top infectious diseases expert Dr Anthony Fauci is the prime illustration of this. Photograph: Leah Millis/Reuters

These are hard times for experts; notably scientists and doctors who believe data (and their interpretation of it) should be allowed speak for itself and, where appropriate, prompt a response in the best interests of the human race or the world we live in. For those working on Covid-19 and climate change it can be particularly rough terrain.

Global authorities in their field of endeavour should not be dismissed so easily, especially those with a record of fashioning effective responses to global crises such as AIDS, Ebola or an overheating planet – or who have added greatly to fundamental knowledge.

Too often good science is countered by vitriol; accusations of lack of independence and instant condemnation with “yes but...” from non-experts. This is evident in the US, where objectivity has become a matter of opinion. The plight of the federal government’s top infectious diseases expert Dr Anthony Fauci is the prime illustration of this.

President Donald Trump, an exponent of anti-science, constantly adds to the cauldron of social media tyranny and displays little respect for those with greater knowledge than himself.

His trade adviser Peter Navarro recently declared Fauci was “wrong about everything” – no doubt doing the bidding of his master; a man who has never admitted a single mistake in office.

The modern phenomenon goes beyond the US. The Irish environmentalist Prof Terry Hughes, an authority on decline of coral reef systems, highlighted on twitter a photograph of a protester whose placard read: “At the start of every disaster movie there is a scientist being ignored” – and added “I have a lot of friends who can relate to this.”

This is everyday reality and complicating matters are pigheaded populist leaders, as illustrated this month when UK prime minister Boris Johnson indicated in parliament he had not read a Government-commissioned report warning of a second coronavirus wave next winter which could cost 120,000 lives. He then insisted unconvincingly he was aware of it.

Fortunately science has a more prominent position within Irish society. There is widespread recognition of its merits while scientists engender a high level of trust. Strategic investment in a knowledge-based economy has helped. The response to the emerging pandemic, where the public heeded the recommendations of National Public Health Emergency Team (NPHET), is proof of this.

Were it always so easy.

“When you mix science and politics, you get politics,” according to John M Barry author of The Great Influenza: The Story of the Deadliest Pandemic in History. With the coronavirus, the US has proved politics hasn’t worked, he believes. So to “fully reopen both the economy and schools safely...we have to return to science”.

The dynamic is different in Ireland though resolution is equally difficult to achieve, such is the deviousness of Covid-19. The politicians have to balance what the science is saying, economic consequences and wellbeing.

This is typical of modern policy challenges facing governments characterised by a mixture of complexity, uncertainty and ambiguity. That is why there is a compelling case for an independent network of scientific advisers to advise government “on the formidable scientific challenges facing Ireland” as outlined by Royal Irish Academy president Dr Mary Canning.

This should be provided by a multi-disciplinary network of specialists in a similar way to NPHET but on a permanent basis. Just look what might be coming down the tracks: a flu pandemic; a storm surge driven by a hurricane that heads for Ireland rather than the Caribbean, unprecedented sea level rise caused by melting Arctic ice sheets, and dramatic ageing of our population post 2050.

The physicist and science communicator Brian Greene revealed the extent of his concern about the disconnect between specialists and the public when asked by the Financial Times, what is the greatest challenge of our time?

He responded: “Many would focus on the most immediate: saving the planet from the devastation wrought by human activity. I’d like to add changing the mindset of the public to recognise that the tools of rational investigation, of science, are available to everyone – and have the capacity not only to radically transform the challenges we face, but also to realise enormous opportunities. The health of democracy requires that every citizen has some familiarity with scientific ideas.”

There is much work to do on this front to bring us all to that better – and safer – place.