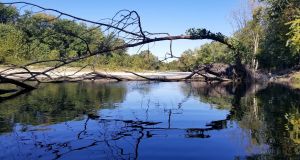 Rivers such as the Great Miami (pictured) which flows into the Ohio River are particularly susceptible to agricultural runoff.

With a flow rate 35-times the River Shannon’s, the Ohio River is one of America’s most important waterways. It flows for 1,579 kilometres from Pittsburgh, Pennsylvania west to the Mississippi River, through a watershed of millions of acres of intensively-used farmland. Until five years ago it was consistently America’s most polluted large river. And today, while much cleaner, around five million people still rely on it for drinking water.

Waterways across America have long suffered the damaging effects of agricultural and industrial activity. It was here in Ohio where sparks from a passing train turned the Cuyahoga River into a blazing fire on a Sunday morning in June 1969. Huge slicks of discarded industrial petroleum floated on its surface for years, with fires regularly setting railroad bridges and ships alight. These incidents not only made the pages of Time magazine but were repeated more than a dozen times throughout the 1950s and 1960s.

In the decades since, huge effort has been put into reducing pollution in America’s rivers.

Since the Clean Water Act was introduced in 1972 (fuelled, in part, by the Cuyahoga River repeatedly going up in flames), there’s been a 20 per cent increase in fishable and swimmable waterways in the country. As Democratic presidents followed a Republican, the Act was always preserved, for generations becoming one of the most celebrated examples of bi-partisan legislation. In 2015, president Barack Obama guaranteed its protections under the “Waters of the United States” regulations.

But while much of the environment is currently undergoing a significant reprieve as industrial activity falls due to the coronavirus pandemic, agriculture has not. In fact, with demand for food soaring as a result of widespread panic buying since the beginning of March, America’s rivers are set for an upsurge in fertiliser runoff.

It follows a move in January by the Trump administration to strip the Clean Water Act of a number of Obama-era and other long-standing provisions through his “Navigable Waters Protection Rule”. It includes reducing the number of protected waterways as well as opening up wetlands to drainage and reclaiming works. It also means smaller rivers and waterways are no longer subject to federal pollution limits.

“All states have their own protections for waters within their borders, and many regulate more broadly than the federal government,” Environmental Protection Agency (EPA) administrator Andrew Wheeler said at the time, proffering a veiled acknowledgment of the reduction of protections.

“Our new rule recognises this relationship and strikes the proper balance between Washington DC and the states … And it clearly details which waters are subject to federal control under the Clean Water Act and, importantly, which waters falls solely under the states’ jurisdiction,” he added.

The changes benefit, among others, golf course developers, real estate interests and industrial scale farming. The rollbacks, according to Trump-appointed EPA officials and a legion of other scientists, went against widely understood scientific analysis. It has led to more than a dozen states suing the EPA for stripping water sources of critical protections.

Critics say the move, which came into force in March, would return water quality to that of 1970 levels; a time when the US population – and consequently the overall demand for water – was less than two thirds of what it is today.

In the US and Ireland alike, wetlands play crucial roles in sequestering damaging agriculture-originated nitrates. In both countries, big agricultural ventures are responsible for much of the damage to rivers and aquifers through nitrate runoff.

Engineers, however, have been working on a ground-breaking way to convert ground and surface water contaminants from agriculture runoff back into ammonia. At Rice University in Houston, Texas it was revealed in January that by using catalytic converter technology, engineers could make “useful chemicals” such as ammonia from nitrate wastewater.

“We asked the question: what can nanotechnology do to help us understand the chemistry of water clean-up?” says Michael Wong, a professor of chemical and biomolecular engineering at the Houston-based university.

As principal investigator of the university’s Catalysis and NanoMaterials Laboratory, working with between 12 and 16 research scientists, Wong started to look into the nitrates/nitrites contamination issue in water five years ago. “We wanted to understand why certain catalysts work better than others,” he says.

“Gold plus palladium work really well, as we found, to get rid of nitrites [but are very expensive]. We were very excited about that. That work led to the more recent work.”

That new research was published in the journal ACS Catalysis in November 2019 and found that rhodium catalyst could effectively replace palladium. “It’s basically a nanomaterial – the same as a catalytic converter in a car – but for water.”

The process of using rhodium also creates quantities of ammonia, which can be re-used as fertiliser.

In the US, just four crops – corn/maize, cotton, soybean and wheat – account for around 60 per cent of NPK (nitrogen, phosphorus and potassium) fertiliser usage, or 15.4 million tonnes.

The catalytic converter technology Wong and his associates are working on has major consequences beyond the US. In Ireland, around one-third of rivers and lakes are failing to meet water quality standards in large part due to fertiliser runoff. Over the last 30 years, the number of pristine waterways has fallen from around 500 to 20, according to an Irish EPA report.

As for industries with fertiliser runoff problems, dairy and pig farms could be major deployers of the technology. “If the regulations are there, that could drive them to adopt better technologies than they have now,” says Wong.

Communities that draw water from groundwater reserves such as wells, and public utilities such as water treatment plants are other industries where the technology could become popular.

“The question isn’t so much ‘will the technology work’ – it’s going to work in all of these waters – the question for me as a technologist is ‘Who is going to actually want to install it?’ Depending on who wants to install it it could be (deployed) sooner or later,” he says.

When are we likely to see this catalytic converter technology in broader use? “If we’re talking about the nitrate/nitrites [example] we’re probably five years away. Not so much because of the technology, but because of the buyer,” Wong adds. “Part of the research is trying to figure out which markets would be best to address.”

While the design stage is still a ways off, Wong suggests that at the household level the cartridge could be attached to a kitchen faucet. At a community level, there would be a much larger catalytic converter in which dirty water would pass through a cartridge and be cleaned.

Bigger picture-wise, once the nitrate has got into the river it’s out there, and so the solution to better water quality is to stop it at source. “Another way to think about it is to treat every operation that produces nitrates and nitrites, treat [them] like a car and stick a catalytic converter at the end of that car, like a tailpipe,” he says.

The current coronavirus-enforced lockdowns have had a major strain on scientific research across the board, but Wong isn’t completely downbeat. “Even though research is shut down we’re still writing papers. Hopefully, we can show people other things we can do with this chemistry.”