Oxford professor Danny Dorling on why deceleration is good for the planet, the economy and our lives 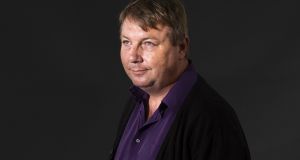 You’d think that there couldn’t be a better time to write a book about the benefits of slowing down but the great irony of Danny Dorling’s new book, Slowdown – the End of the Great Acceleration – and why it’s good for the planet, the economy and our lives (Yale University Press), is that it was written and published just before the Covid-19 pandemic.

Most of Dorling’s book tour flights to the United States, Ireland and across Europe were cancelled because of the pandemic. So the professor of geography at the University of Oxford gave online talks including one with the UCD Earth Institute (ucd.ie/earth). “I was due to take 10 flights between March and June but this has made me think – in terms of promoting a book – flying and talking to 50 people in America was a stupid idea,” he explains on a call from his home in Oxford.

In Slowdown, Dorling, a social geographer, argues – with lots of graphs to validate his claims – we are already experiencing a slowdown in terms of population, fertility and even Gross Domestic Product (GDP). He is not saying these things are decreasing in and of themselves but that that there is a deceleration in the increases that are occurring. He analyses data sets on everything from world population and fertility rates to student bank loans, car loans and published books.

Take for example, global population – which is the central part of this academic tome and the theme of his previous book, Population 10 billion (2013). Prof Dorling, and many other demographers, challenges the UN predictions of a world population of 10 billion by 2050 or 11 billion by 2100. In fact, he says the UN has since revised these figures downwards.

Citing examples such as Greece (population peaked at 11.3 million in 2010) and Japan (population shrinking from a high of 128 million in 2011), Dorling also says China’s population growth has been slowing down since 1968. And, most striking of all, he states that while populations in African countries – the least polluting countries in the world – continue to rise, the rate of growth is slowing down. This, he claims, is because in Africa fertility rates are dropping partly due to out-migration but also because many African women are deciding to have fewer children than their parents.

He argues that a slowdown in population does not necessarily mean immediate stability but rather stability to come. “It is most likely that a century from now, the average number of children in a family will be fewer than two. Slowdown means that within a century the new global norm will be a slowly shrinking total planetary human population,” he writes.

A child born today can expect to live to see the world’s human population shrink as the age of the world’s oldest person has not increased in the past 20 years. He also argues, rather optimistically, that there is no need for inflation in a more stable future. And that great economic inequalities are very hard to sustain during and following a population slowdown. For example, less demand for housing reduces the price of houses.

Dorling says it takes an imagination leap to realise that we are slowing down as many of us aren’t yet aware that it is happening. And in fact, he wasn’t expecting to find deceleration himself – having initially set out to write a book about the acceleration of everything from technology to urbanisation.

“Accepting that a slowdown is upon us will require us to shift our fundamental view of change, innovation and discovery as unalloyed benefits. Will we be able to accept that we should stop expecting ceaseless technological revolutions?” adds Dorling, who professes to having been a techie nerd in his youth.

According to Dorling, the so-called great acceleration that has occurred in recent generations created the culture in which we live and our expectation for a particular kind of progress. He refers to the large majority of older people, who have for the most part seen their health, housing and workplaces improve, education extended and absolute poverty reduced compared to what their parents and grandparents experienced.

This generation, he says, now have a sense that their children’s generation will not be much better off than they are now and it is this generation – in which he includes himself – who are feeling a new sense of slowdown.

There is an environmental theme that runs through the book too as Dorling argues that if we do not slow down, there is no escape from imminent disaster. “We would wreck our very home, the planet we live on,” he says; reiterating the scientific knowledge on the rising levels of carbon dioxide emissions caused by human activity on the planet.

He also argues that as a well-ordered affluent society slows down, it relies more and more on public transport, cycling and walking rather than private cars. And as more people around the world begin to live in better planned cities, fewer will need cars.

He is conscious of the current “Greta” generation of politically-active students who believe “there are only 12 years left to save the planet”. And, while he doesn’t disagree with the Paris Agreement on climate change, on which these beliefs are based, he believes societies will rise to the challenges of reducing carbon emissions. “I’m an optimist who grew up during the 1980s when we feared nuclear war would destroy the world and then the USSR and the USA disarmed 90 per cent of their nuclear warheads.”

Dorling insists we must stop seeing stagnation as an ill. And that as our schools, workplaces, hospitals, parks, universities and homes will no longer transform as much as they have changed for each of the past six generations, this will result in more durable goods and less waste.

His critics have argued that he chooses his data sets to suit his arguments – particularly those on student loans and car loans in the United States. Panellist in the UCD Earth Institute webinar, Dr Larry O’Connell, director of the National Economic and Social Council noted Dorling’s prediction that we are heading for a more just and stable future is over-optimistic. “In our experience, it will be difficult and costly to bring about the transition that’s needed,” he added.

Another panellist in the UCD webinar, Dr Marie Moran, director of the UCD Equality Studies Centre, said that although she found Dorling’s arguments engaging, refreshing and hopeful, they were passive and lacked “human agency”. “Where is the politics in all of this? There are powerful elites and institutions that have no will to change and the power to block change,” she pointed out.

Dorling concedes that inevitably there will be something else we are doing today that will have terrible repercussions of which we have as yet no conception at all.

And, finally, what are his views on the Covid-19 pandemic? “Previous pandemics such as flu pandemics in 1951, 1957 and 1968 have been largely forgotten because they were followed by periods of economic growth,” he says. But with Covid-19, Dorling claims the economic slowdown had already started. “But we don’t tend to look at slowdown so I think we will be obsessed with worldwide recession following the pandemic,” he adds.

Regarding the social costs of Covid-19, Dorling says, “we’ve been lucky as it hasn’t been as deadly as it could have been. We didn’t let it move through populations like all other pandemics did. It has shown us that we care more about older people’s lives than we used to because we are able to”.

And what about the slowdown that the Covid-19 pandemic lockdowns have caused? “Slowdown gives us – as this pandemic has shown us – time to reflect, time to change what really matters. It gives us time itself. I’m hoping the pandemic will make it easier to slow down.”