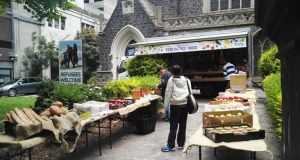 Food Justice Truck for Asylum Seekers and Refugees in Melbourne

More than half the world’s population currently lives in cities and it is there where most food is wasted – in supermarkets, restaurants, office canteens, private homes and even in gardens where unwanted fruit and vegetables go rotten.

Food sharing initiatives are one way to reduce food waste while also providing access to local food in convivial, inclusive settings. Through the use of social media, smartphone apps and websites, many of these volunteer-led projects have grown rapidly yet remain insecure as they often don’t fit neatly into current public policy and planning regulations.

The idea and initial funding for the project came from an Environmental Protection Agency study which looked at how we might purchase, grow and cook our own food to eat more sustainably in the future.

“It’s critical that our urban food systems become more innovative to deal with uncertainty around food security in the face of climate change in the future. In our study, we found that the most sustainable form of eating in 2050 would be more collaborative,” Davies says.

“Food waste in the commercial sector needs to be addressed in the same way as in the domestic sector. It’s about careful purchasing, use of ingredients and control of portion sizes. Our primary focus needs to be on prevention: avoiding generating food waste with redistributing (sharing) food next on the food waste hierarchy,” she adds.

Well-known food sharing initiatives include the award-winning Irish social enterprise FoodCloud, which organises the redistribution of surplus (or out of date) food from supermarkets to nearby charities via a smartphone app. But there are many other food sharing communities that gift, barter or collect food. These range from groups which harvest the seasonal glut of local fruit and give it to charities to community gardens to people who invite international travellers to share a meal with them in their homes to asylum seekers in Ireland cooking their native food in shared kitchens.

The first phase of the ShareCity project created a database of more than 4,000 enterprises in 100 cities around the world. Launched in Dublin in 2016, this database showed how these food sharing initiatives can play an active and transformative role in advancing urban food sustainability by reducing food waste and building healthier communities.

“The digital map allowed people to be inspired by what was out there,” says Professor Anna Davies, who is the principal investigator of ShareCity. Her book Urban Food Sharing will be launched at the EUGEO congress on the geography of Europe at NUI Galway in May.

Following the creation of the digital map, researchers then looked at how information communication technology (websites, apps and social media) shaped the way food was shared. “We looked at how ICT can become a way to exchange knowledge about growing and cooking food in shared spaces,” Davies explains.

Davies says that while many food sharing initiatives offer valuable food sustainability and social cohesion, they rarely have the resources to collect and analyse data and communicate it in a way that is important for policymakers and philanthropists.

Davies says the Share-It tool will allow policymakers and philanthropists to get a clearer picture of the work carried out by food sharing initiatives, which will in turn give these initiatives a chance to make their case for funding and/or security of tenure.

For example, while the London-based Global Generation were able to negotiate space in the Kings Cross redevelopment site for community gardens in skips, the multicultural community garden, Himmelbeet project in Berlin, couldn’t get its temporary licence renewed because of strict planning regulations.

Planning permission can also be an issue for community gardens which can’t be classified as private gardens or public parks. “Community gardens often fall between two stools in urban planning departments, which is why they might need to be recognised as a new category of urban green recreational spaces,” Davies notes.

And, so the fourth and final stage of ShareCity project will look at how to manage the governance of these new food-sharing initiatives. “We need to ensure their sustainability in terms of policies and regulations so we don’t lose the benefits they bring.” New EU food donation guidelines support businesses to donate food but don’t yet provide clear guidelines for the communities who run food sharing initiatives.

In a recent academic paper, Davies suggests food sharing initiatives are “potential agents of change in urban governing systems” All that’s needed for them to flourish is a supportive food policy infrastructure, she argues.

“Through our research, we have to identify the pinch points with current policy which is not designed for food sharing. We need innovation lanes in policy so food sharing groups can try something out in a limited area or for a limited time and see what the risks are,” she adds.

FoodCloud: This award-winning Irish social enterprise organises the redistribution of surplus food from supermarkets to charities in Ireland and the UK. FoodCloud links suppliers directly to breakfast clubs, homeless hostels or family support services willing to collect the free food via a smartphone app. See food.cloud

Global Generation: This London-based charity has developed community and commercial gardens on rooftops and restaurant terraces working with young people in and around the Kings Cross Development site. The Skip Garden is a moveable urban garden where fruit and vegetables are grown for use in the café, connecting people through seasonal nutritious food. See globalgeneration.org.uk

Falling Fruit: Fallingfruit.org is a US charity which has a global interactive map of urban and rural locations, where people can forage for wild foods or pick otherwise wasted fruits and vegetable from city trees and farmers’ fields (with permission). The aim is to share the food with neighbours or local community groups. The map includes 2,700 different types of edible foods in 1.4 million locations. Falling Fruit Ireland is the Irish branch of this charity.

Cooking for Freedom and Our Table: Cooking for Freedom was set up by a group of asylum seeking women living in Direct Provision accommodation in Ireland so they could cook for themselves and their families. They fundraise to buy ingredients for the food they cook and share in shared kitchens (cookingforfreedom.ie). Our Table, another community-based project, campaigns for the end to Direct Provision through multicultural meals in pop-up cafes such as Christ Church Cathedral, Dublin and the Project Arts Centre.

Eatwith: Billed as the world’s largest community for authentic food experiences with locals, this app offers travellers opportunities to eat with local people, join cooking classes with local chefs or go on food tours. There are about 20,000 hosts and 150,000 guests in 130 countries to date. Eatwith.com