At last, the Nobel Prize judges have begun to recognise women again

Two of 2018’s eight winning scientists are women. It’s a step in the right direction 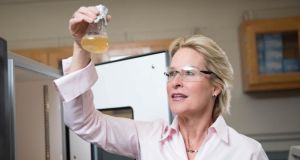 Winners of the Nobel prizes in science and medicine are frequently honoured for complex research that even other scientists can find hard to follow. And all too often the laureates are all men. That has changed this year, at least in part.

As it happened, just before those honours were announced, Cern, the European organisation for nuclear research, suspended one of its staff, Prof Alessandro Strumia, for claiming at a seminar that men are discriminated against in physics, even though the field was “invented and built by men”, as women are being appointed, he contended, even when they have fewer citations in scientific journals than their male peers. That no doubt fuelled the global debate about women in science.

It’s true that the majority of the world’s most eminent physicists have been men, but that is “mostly a historical bias”, as men have been able to study physics for longer than women, according to Dr Julie Moote of University College London, who also took part in the seminar.

Dr Sheila Gilheany of the Institute of Physics in Ireland says that she is always delighted to see people’s work acknowledged but that this is especially true when it is women’s contribution to science that is being recognised, “because very often it just isn’t”. Recognition gives “the fantastic women working in physics in Ireland” a lift and makes women more generally believe it’s possible to reach the highest levels of science.

Here are all eight of this year’s Nobel laureates in science and medicine.

Frances Arnold, of California Institute of Technology; George Smith, of the University of Missouri, and Gregory Winter, of Britain’s MRC Laboratory of Molecular Biology, won the Nobel Prize in Chemistry “for harnessing the power of evolution to produce novel proteins” used in everything from environmentally friendly detergents and biofuels to cancer drugs.

Their work helped generate the world’s top-selling prescription medicine, the antibody injection adalimumab, which is used to treat rheumatoid arthritis and a wide range of autoimmune diseases.

They have been “inspired by the power of evolution and used the same principles – genetic change and selection – to develop proteins that solve mankind’s chemical problems”, according to the Royal Swedish Academy of Sciences, which awarded the prize.

Arnold’s groundbreaking work is on enzymes – proteins that are catalysts in biochemical reactions – which led to the development of better industrial chemicals and pharmaceuticals.

Smith developed a method that uses a bacteriophage – aka a phage, or virus that infects bacteria – to produce new proteins. Winter used the same phage technique for the “directed evolution” of antibodies, with the aim of producing more effective medicines.

Nobel Prize in Physiology or Medicine

James Allison and Tasuku Honjo won the Nobel Prize in Physiology or Medicine for discoveries leading to new approaches in harnessing the immune system to fight cancer.

They showed how different strategies for inhibiting the brakes on the immune system can be used in the treatment of cancer, notably proteins known as “checkpoints” that prevent the body and its main immune cells, known as T-cells, from attacking tumour cells effectively. Their focus is on biochemical switches that harness the body’s immune system to attack malignancies.

Allison, a professor at the University of Texas MD Anderson cancer centre, in Houston, studied a protein called CTLA-4 that functions as a brake on the immune system and realised the potential for unleashing immune cells to attack tumours if the brake could be released. He developed an antibody that blocks the protein, preventing this braking action. Resultant “checkpoint inhibitor” drugs have been shown to produce remarkable results in treating lung cancer, renal cancer, lymphoma and melanoma.

Honjo, a professor at Kyoto University, in Japan, discovered a second protein on immune cells that operated as a brake, but with a different mechanism.

Prof Luke O’Neill, of Trinity College Dublin, calls both winners pioneers. “As immunologists, we are all delighted,” he says.

Immunotherapy has become the big new frontier in the fight against cancer, but only after decades of effort led to nothing. The numerous failures caused most people to abandon the field, but Allison, whom O’Neill first met 20 years ago, was a lone voice who stuck at it. “It’s a good example of perseverance.”

Honjo was already famous for cloning important genes and for his work on the immune system.

“They led us to the right pond to fish, to go after checkpoints,” O’Neill says.

Although not everyone responds to the new treatments, and there can be side effects, scientists are “now in the right pond” and so should be able to develop really effective cancer treatments, he predicts.

The Nobel Prize in Physics was awarded to three physicists for their work on lasers. Arthur Ashkin invented “optical tweezers” – a way to manipulate tiny objects using focused beams of light – while the French scientist Gérard Mourou and the Canadian scientist Donna Strickland were honoured for their method of generating high-intensity, ultrashort optical pulses, which can be used to cut or drill very precise holes in material, including living tissue.

Ashkin invented his tweezers in 1986, while working with Bell Laboratories in the US. They can grab tiny objects such as atoms, viruses and bacteria, holding them with weak forces arising from their interaction with the light.

He first found that he could use a laser to nudge particles around “like pushing ping-pong balls with a hairdryer”. His tweezers are used to probe and measure forces between particles, to examine “the stretchiness” of DNA and to clear blockages from blood vessels.

Mourou’s and Strickland’s breakthrough came in 1985, at the University of Rochester, in New York state. By stretching a short laser, then amplifying and compressing it again to pack more light into a smaller space, they were able to create extremely short and intense laser pulses that can cut a wide range of materials. Their technology is used in corrective eye surgery.

After hearing that she had won, Strickland remarked: “Obviously we need to celebrate women physicists, because we are out there, and hopefully in time it will start to move forward at a faster rate.” That she was not deemed significant enough to merit her own Wikipedia page (until after the announcement) is another indication of the marginalisation of women in science.

Strickland and Arnold are the first women Nobel laureates in any field for three years. The academy said last year it would seek to encourage nominations of women researchers more actively, to begin addressing the imbalance.

Twenty-eighteen seems to have been a step in the right in direction, a year when the academy also got it all right in terms of the calibre of the winners – at a time when others were already questioning if the Nobel prize approach was out of kilter with the collaborative processes of modern research.

Nor could the academy be accused of being ageist. Ashkin is the oldest person to become a Nobel laureate, at 96 – and he’s still conducting research. “I am busy working right now, writing an important paper on solar energy,” he says.