Zappone asks Varadkar to speed up the abortion referendum 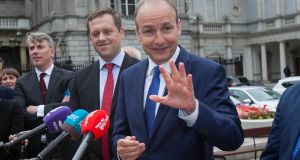 Minister for Children Katherine Zappone has asked the new Fine Gael leader, Leo Varadkar, to accelerate preparations for an abortion referendum, which is expected to take place next year.

She made the request during another round of meetings that Mr Varadkar held on Wednesday ahead of his expected election as taoiseach in the Dáil next week.

After his meeting with Mr Varadkar the leader of Fianna Fáil, Micheál Martin, confirmed his party will facilitate the Fine Gael leader’s election by abstaining.

Mr Varadkar also met the Independent Minister Denis Naughten and the Clare TD Dr Michael Harty, who supports the Government on a case-by-case basis from the Opposition benches.

Dr Harty supported Enda Kenny in a Dáil vote for taoiseach last year, and his support is likely to be needed by Mr Varadkar.

He raised a number of issues with Mr Varadkar, such as facilities at Ennis Hospital and the recently published report from the Oireachtas Commitee on the Future of Healthcare. The Minister is understood to have said a lot of the committee’s proposals would be difficult to afford.Speaking afterwards, Dr Harty said he is not yet in a position to say he will vote for Mr Varadkar.

Ms Zappone’s spokesman said she raised a number of issues with Mr Varadkar, such as increased funding for childcare. She also raised concerns about the case of Ibrahim Halawa, who is a constituent of hers in Dublin South-West.

And she asked that a “parallel process” be established alongside the Oireachtas committee examining the Eighth Amendment to the Constitution, which gives equal rights to the life of the mother and the unborn. This process would look at possible referendum wordings, as well as potential legislative options outlining the circumstances in which abortion could be allowed.

Mr Varadkar’s spokesman said he agreed with the proposal, and said the Attorney General should assist the abortion committee on it.

Mr Varadkar has already said he believes a referendum will be held next year. Ms Zappone wants preparations to begin before the Oireachtas committee finalises its views.

Speaking after his meeting, Mr Martin said: “Fundamentally, we made it clear to him that we will continue to facilitate the continuance of the confidence and supply agreement and we would facilitate his election as Taoiseach next week by abstaining on that vote.”

He also described the meeting as frank, constructive, professional and businesslike, although he said Fianna Fáil is not entirely satisfied with the delivery of elements of the confidence and supply deal over the past 12 months, particularly on “substantive issues such as health and housing”.

He also said he favours greater infrastructural investment, as Mr Varadkar does.

Mr Martin said both party leaders had “identified education as a key sector for the future”, and said increased spending in that area could offset the effects of Britain’s withdrawal from the European Union.

But he added that there had been a “clear breach” of the confidence and supply agreement on the issue of mental-health funding. He said €35 million was supposed to have been allocated to mental-health projects but only €15 million had been recently provided. Mr Martin also said he discussed with Mr Varadkar how key legislation could be moved through the Dáil more quickly.

Mr Martin and Mr Varadkar also discussed the ongoing crises in the justice sector, but the Fianna Fáil leader said he did not ask for the Garda Commissioner, Nóirín O’Sullivan, to be removed from her post. He did, however, say that Mr Varadkar’s government will have to restore confidence in the administration of justice.

When asked if he felt old compared with Mr Varadkar, who is 38, Mr Martin, who is 56, replied: “I don’t feel old at all.” He said he has no reason not to trust Mr Varadkar. He also said he doesn’t believe there is a need for a general election every 12 months.