'You can’t ignore it': BusConnects a crux issue in south Dublin 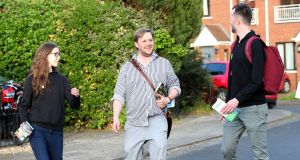 “Do you know anything about this spine, what’s it called, BusConnects?” asks a young woman in Harold’s Cross, south Dublin, who has just answered the door to her local Green Party councillor. It’s a sunny Wednesday evening on Mount Argus Grove and Patrick Costello is hoping to capitalise on increased public concerns about the environment and climate change.

Cllr Costello, who topped the poll in the Rathgar-Rathmines ward in 2014, tells the woman: “I’ve a lot of concerns about the plans but it is a huge opportunity”. The Green Party councillor points out that BusConnects is not strictly speaking a local elections issue – the plan was put forward by the National Transport Authority (NTA) and is part of the Government’s Project 2040 – but he admits it has dominated discussion in the area over recent months alongside housing.

“Some candidates are very negative about the [BusConnects] plan and are looking to kill it, some residents’ groups just want to kill it. I’m trying to engage with it and change it, which is a bit of a grey nuanced answer which people don’t often want to hear,” says Cllr Costello.

Over a kilometre away Fine Gael councillor Anne Feeney, who was co-opted to Dublin City Council to represent Rathgar-Rathmines following the election of Kate O’Connell to the Dáil in 2016, is canvassing on Rathgar Avenue.

“You can give the message to Leo [Varadkar] that the people of Rathgar are absolutely adamant that this is not going to happen or we will never vote for Fine Gael in the area,” says a woman living on the road.

“I’ll chain myself to those trees before I let them cut them down,” she says, adding that she would be in favour of a congestion charge or limiting private vehicles.

Cllr Feeney has held three public meetings in relation to the BusConnects plan, which aims to overhaul the current bus system in the Dublin region by creating 230km of dedicated bus lanes and 200km of cycle tracks along 16 of the busiest corridors, along with a redesign of the network.

The first of those meetings was last August in St Mary’s Rugby Club in Templeogue which Cllr Feeney says was attended by around 200 people.

Public representatives and parties have been accused of using BusConnects as an opportunity to get posters on poles ahead of the elections and that some are jumping on the bandwagon and criticising the plans for political gain.

However, Cllr Feeney defends her public meetings stating “You can’t ignore it”.

“It is a significant issue in these areas. It will change the nature of some of these urban areas and it will have implications in terms of diverted traffic,” she says. “It will have good points in terms of better, safe cycling infrastructure but it is a big issue and as a public representative you’ve got to engage with people on the issues that are important to them.”

When a door opens and you prompt a resident to talk, they say ‘what about the buses?’. That is what has been going on

Fianna Fáil candidate Deirdre Conroy, a barrister and planning specialist, has been vocal in her opposition to the plans, making a case instead for an underground Metro. Ms Conroy held a public meeting in relation to BusConnects and also carried out local area impact assessments on a number of the proposed corridors.

In recent weeks red ribbons have been tied around trees that may be cut down to accommodate the bus corridors as a sign of protest.

Ms Conroy pins a red ribbon to her green rain jacket before heading out to canvass on a quiet Thursday afternoon around Terenure Road East, which would be directly affected by the plans.

“I’ll vote for you if you can sort this road, you keep up the pressure,” a middle-aged man tells her.

Another resident on the road points to the impact assessment report she is carrying in her arms and says, “I’ve seen that, you have my vote!”

Fianna Fáil’s other candidate in the area, councillor Michael Mullooly, didn’t hold a public meeting, but agrees that BusConnects has been the “biggest issue” among local residents since he was co-opted to Dublin City Council in 2016.

Independent candidate Samantha Long, who has also been critical of elements of the plans, says, “When a door opens and you prompt a resident to talk, they say ‘what about the buses?’. That is what has been going on.”

Sinn Féin councillor Ray McHugh, who has been focusing on the Kimmage/Crumlin area in a bid to retain his seat, says BusConnects has been mentioned mostly by residents on the Crumlin Road, who stand to lose part of their front gardens under the plans.

“It hasn’t been [a] huge [issue], it’s more anti-social behaviour and litter,” he says. “I know there’s a big campaign going on over in Rathgar, ‘communities not corridors’ and that, but it hasn’t been huge here.”

Mary Freehill, a Labour Party councillor for 36 years, also points out the transport plan is “totally outside” the remit of local councillors.

“BusConnects is being dealt with by the NTA which is a semi-State body established by the Government. It’s Government policy,” she says.

“It’s probably true to say that the TDs are delighted, that they’re hoping that it will go away and it will have been more of an issue in the locals than in the generals, when in fact it’s really a general election issue in terms of where the power lies.”

Cllr Costello agrees, “we don’t have any direct involvement in it”, but points to a motion carried by Dublin city councillors in March.

The motion asked that Dublin City Council make a written submission to the NTA regarding the plans seeking greater consideration of the needs of pedestrians and cyclists and an “inter-disciplinary approach”. It also asked that the submission seek a commitment from the NTA to include the views of affected residents and businesses “at all stages of the process” and to ensure the concerns of people with disabilities are central to the redesigned network.

“We do have a role as a public representative, we can make a submission the same as anyone else but also we can use of the office of a council to be a bit more organised, do a bit more lobbying, to be a bit more engaged,” says Cllr Costello.

David O’Connor, head of environment and planning at Technological University Dublin, says there seems to be a difference in communities’ responses to the plans based on their distance from the city centre.

“Communities that are closer into the centre are sort of protesting about trees, loss of car park spaces, our village centre is going to be damaged,” he says. “Communities further away and I’ve noticed this in the media, and on social media quite a bit, the dialogue is saying ‘we’re stuck on a bus, we need a transport system’.

“I get a sense that representatives are tuning in to this and it’s making them think what BusConnects and the other projects are.

“I think that’s possibly reflected in the very good polling that the Green Party are getting, because of all the different parties I think they’ve had a more complex understanding of what BusConnects is and that it’s needed but certain things need to be changed.”

Mr O’Connor describes the high-level engagement with the project as “a really good thing”.

“When is the last time that we’ve had public transport project, a big scheme to make big improvements to the city’s transport network and where you’ve got this level of public engagement and debate?” he asks. “I think it’s a good thing and is something to be harnessed.”

Whether local councillors’ level of engagement and interest in BusConnects continues after this week’s elections remains to be seen.