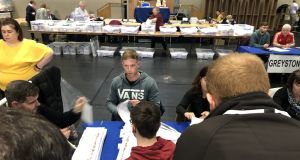 Minister for Heath Simon Harris has been re-elected for Fine Gael. He, along with Fianna Fáil health spokesman Stephen Donnelly and Green Party councillor Steven Matthews, took the final three seats in Wicklow in the 15th count late on Monday night.

On Sunday, Sinn Féin’s John Brady swept to victory on the first count in Wicklow after topping the poll, gaining some 17,000-plus votes, or 24 per cent of the poll.

He was followed by Jennifer Whitmore of the Social Democrats, a Greystones-based councillor who outperformed many pundits’ expectations.

All five TDs for Wicklow are now drawn from the commuter-belt area of Bray and Greystones, leaving the south and west of the constituency with no local representative.

Two sitting TDs for Fine Gael and Fianna Fáil lost their seats, in line with the national trend against the traditional big two parties.

They are junior minister Andrew Doyle, who has served as a Dáil deputy for 13 years, and Fianna Fail’s Pat Casey TD, a Glendalough-based hotelier.

There had been speculation earlier during the counts that Stephen Donnelly was at risk. His transfer from the Social Democrats to Fianna Fáil, along with internal party tensions, saw him lose a large share of his poll-topping vote in 2016.

However, strong transfers from his constituency colleague Casey, in particular, saw him leapfrog to safety.

Jennifer Whitmore’s performance has been a big boost for the Social Democrats. The first-time TD has been a councillor since 2014 and a became a founding member of the party a year later.

The Green Party’s Steven Matthews is also an unknown to national politics. The Bray-based councillor who works in railway signalling with Irish Rail has been a town councillor and, later, county councillor over the past decade or more. He topped the poll in the local elections.