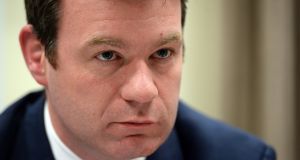 Labour’s Alan Kelly has been elected on the ninth count without reaching the quota. Photograph: Cyril Byrne/The Irish Times.

The Tipperary election count is now complete following the election of Labour’s Alan Kelly and Fianna Fáil’s Jackie Cahill on the ninth count without reaching the quota.

The ninth count, which involved the distribution of Independent Mattie McGrath’s 1495 surplus, was announced shortly after 2.30pm.

The election of outgoing TDs Kelly and Cahill followed hot on the heels of the election of Mattie McGrath and Sinn Féin’s Martin Browne in the eight count.

Outgoing Labour TD Alan Kelly was the fourth TD elected on 13222 votes while Cahill clinched the final fifth seat with 12939 votes. Both were several hundred votes short of the 13,632 quota.

Mayor of Clonmel Cllr Garret Ahearn was unable to gain enough votes in the last few counts to be in contention to win a seat for Fine Gael.

The constituency is once again without a Fine Gael representative in the Dáil. The party had made a big push in the county in this campaign to regain one of the two seats it lost in 2016.

Ahearn’s failure to win a seat and the defeat of left-wing Independent Seamus Healy also means that Tipperary’s county town of Clonmel no longer has a representative in the Dáil.

*Independent candidate Marese Skehan died suddenly on February 3rd after nominations were finalised. As a result her name remained on the ballot paper.