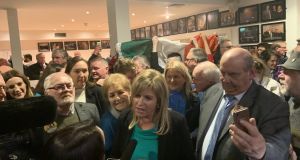 The county has for a long time been caught in a Fine Gael/ Fianna Fáil stranglehold, but the Sinn Féin surge has burst open the grip of the traditional big two.

Speaking at the count centre in Castlebar, Ms Conway-Walsh said: “There were lots of predictions that it would be two and two all the way, but we knew from canvassing right across the county from the beginning that there was a mood for change.”

Addressing the count centre, Lisa Chambers said: “This is democracy in action . . . It is difficult in defeat always. Of course, I am disappointed but life moves on.”

The Green Party’s rising star Saoirse McHugh was knocked out after the fifth count, with a total of 6,036 votes, while Fine Gael’s Michelle Mulherin finished with 7,427 votes after the sixth count.