When protesters set the stage at media events

Sometimes, despite the best plans of organisers and security alike, press conferences do not go to plan - here are some famous examples 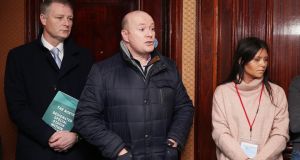 Staging a disruption at a media conference or event - as Austin Stack, whose father was murdered by the IRA, did during a press conference featuring Sinn Féin leader Gerry Adams on Thursday - is a potent and effective tactic for those who oppose the message to get their own message across.

There have been a number of such high-profile incidents in recent years.

Beleaguered Fifa president Sepp Blatter - whose organisation was being investigated for widespread corruption and graft at the time - was holding a press conference in Zurich, Switzerland, when comedian Lee Nelson stood in front of him, made a short statement, and then dramatically showered him with paper money.

The European Central Bank president Mario Draghi was holding a press conference in Frankfurt, Germany, that was as low-key and mundane as you would expect such an event to be.

Suddenly, a young woman leaped onto the table and showered him with paper and glitter.

Not sure of what was being thrown at him, the Italian technocrat put up his hand in a defensive gesture.

The protester was German activist Josephine Witt, who repeatedly chanted, “End the ECB dictatorship”, before being carted off by security guards.

Ms Witt said she was objecting to an unelected and unaccountable institution making decisions that caused austerity in Europe.

She had got into the press conference by presenting herself as a journalist.

The Labour Party made a big deal of its first national conference after going into coalition in 2011, holding it in the Bailey-Allen Hall in NUI Galway.

However, the conference was sabotage by group of hundreds of far-left campaigners.

They succeeded in getting being the thin security cordon and succeeded in drowning out some of the proceedings with their chants.

Responding angrily, tánaiste Eamon Gilmore said: “We pulled the economy back from the brink and prevented Ireland from becoming a banana republic.”

During its early days in Ireland, representatives of the Troika held press conferences at the end of their quarterly visits to Dublin.

That practice stopped after a dramatic incident in which broadcaster Vincent Browne confronted Klaus Masuch of the European Central Bank at the press conference in January 2012.

Ignoring a press officer who requested the microphone back, Browne asked Mr Masuch to explain why the ECB required that Irish taxpayers pay billions of euros to unguaranteed bondholders.

In a tense and prolonged exchange, Mr Masuch refused to answer the question, saying he had answered it at a previous conference.

Martin McGuinness was Sinn Féin’s candidate in the presidential election that year and seemed to be performing strongly in the campaign.

However, that all changed when he arrived in Athlone, Co Westmeath, a few weeks before polling day to meet supporters and attend a party event.

He was confronted by David Kelly, the son of the late Pte Patrick Kelly, who was shot by the IRA at Derrada Woods, Co Leitrim, in 1983, during the operation to rescue kidnapped businessman Don Tidey.

Kelly held up a picture of his father and said: “I want justice for my father. I believe you know the names of the killers of my father and I want you to tell me who they are. You were on the army council of the IRA.”

McGuinness denied he knew who was involved. He also denied he was on the army council. Kelly said McGuinness was a liar.

The intervention, which happened in the full glare of the media, put paid to any hopes McGuinness had of winning the election.

Media tycoon Rupert Murdoch was being questioned by a House of Commons select committee about the hacking and related illegal activities that were practised by British media organisations owned by his corporations.

A comedian with the alias of Johnny Marbles had managed to get in the public gallery during the questioning.

As Murdoch was answering a question, Marbles pounced and pushed a foam pie into Murdoch’s face.

Murdoch’s wife, Wendi Deng, literally sprung to his defence, coming from behind her husband to punch Marbles in the face.

A Green Party press conference announcing its European election campaign was disrupted by Ed Horgan, a former Army officer who has campaigned for many years against the use of Shannon Airport by US troops.

Mr Horgan arrived into the conference room and strode up to the top table while party leader John Gormley was speaking.

He dramatically tore up his Green Party membership card and accused the party of selling out on the issue of Shannon Airport.

“I’m resigning from the Green Party because of all the promises you have broken,” he said.

The Green Party later said that Mr Horgan had not been a paid-up member of the party since December 2007.

A press conference with George W Bush in Iraq took a dramatic twist when an Iraqi journalist threw his shoe at the US president.

TV journalist Muntazer al-Zaidi was protesting against ongoing US involvement in his country. Throwing a shoe at a person is considered an insult in Iraq.

The launch of the Fianna Fáil manifesto for the 2002 general election campaign was going smoothly.

Like 2002, it was a slick affair, with a glossy publication and a press conference choreographed by director of elections PJ Mara.

However, Bertie Ahern’s address unravelled when the journalist Vincent Browne stood up and confronted the then taoiseach about his personal finances and money he had received from the British-based coach company owner Micheál Wall.

“The problem about this money that you got from Micheál Wall is, that it ain’t credible that it was for the purpose of the renovation of a house,” Browne charged.

Initially, Ahern would not respond. When Mr Mara tried to interrupt, Browne turned his sights on him and said that 20 years earlier he had tried to stop journalists from asking questions about Charles Haughey.

Mr Browne said: “I hope Fianna Fáil has changed and we won’t be obstructed in doing so now.”

Ahern then engaged with Browne and said the money had nothing to do with the Mahon Tribunal, which at the time was investigating payments made to politicians.

“I allocated my money for uses and I’m entitled to do that. I earned the money,” he said.

Fianna Fáil eventually won the election, but Ahern’s personal finances dogged the party for the first fortnight of the campaign.

In the same election campaign, the Progressive Democrat leader Michael McDowell had organised a press event in Ranelagh.

The party was under pressure and they planned to repeat a publicity stunt that had worked well in the 2002 election.

In 2002, McDowell had climbed up a ladder and posted a poster on a lamp that said: “Single-party government - no thanks.”

But this time round, the event was sabotaged by Green Party leader John Gormley - who was standing for election in the same constituency as Mr McDowell - who accused his rival of distorting the facts in a pamphlet the Progressive Democrats had distributed.

Both politicians squared off in a public squabble that was captured by the scrum of media who were present.

It became known as The Rumble in Ranelagh, and contributed to McDowell losing his seat.

Ms Butterly waved a banner and accused Mr Blair of being complicit in air attacks by the Israeli forces: “This is an insult to the families of thousands of Lebanese who have died. Shame on you, shame on you, Mr Blair.”

Then Fine Gael leader Michael Noonan had a disastrous general election campaign in 2002, suffering a humiliating defeat to Bertie Ahern and the Fianna Fáil juggernaut.

Fine Gael lost more than 20 seats in the vote, which led to Noonan resigning on the night of the count.

The moment that symbolised his entire unfortunate campaign occurred in Boyle, Co Roscommon, a few weeks before polling day.

Mr Noonan was involved in a routine walkabout with supporters when a young woman emerged out of nowhere to push a custard pie into his face.

There was no particular reason for the attack.

But the moment, captured on camera, became symptomatic of the mí-ádh afflicting Fine Gael and its unpopular leader.