‘Wet pubs’ should be given a chance to reopen, Varadkar says 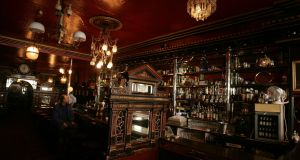 Tánaiste Leo Varadkar has said so-called “wet pubs” should be given the chance to reopen and prove that they can operate safely.

Mr Varadkar made the comments at a private meeting of the Fine Gael parliamentary party on Wednesday night, where he noted that the State was an outlier across Europe in terms of the reopening of bars. He said that if certain rules are in place, publicans should be given the opportunity to reopen their doors.

The intervention comes as sources now believe that “wet pubs”, ie pubs that are not serving food, could reopen their doors in early October if the State’s public health team gives the green light to do so. Industry sources believe that once the Government has published its new roadmap for living alongside Covid-19, an announcement could be made on the issue as early as September 18th. Sources say that such pubs are now aiming towards a potential reopening date of October 5th.

A Government source said that while no definitive such date has yet been agreed, there is ongoing work on advice, guidance and protocols for the remaining closed pubs.

The latest developments come as Minister for Justice Helen McEntee said that legislation to give the Garda greater powers to enforce public health regulations on pubs and restaurants amid the Covid-19 pandemic will help “bring us further on the road” to a more open society.

Smaller parties and Independents criticised the legislation as “draconian” given there are few offending businesses in this regard. But Ms McEntee insisted in the Dáil the legislation would encourage “the small minority of licensed premises who are acting contrary to public health regulations to bring themselves into compliance”. The Bill will give An Garda Síochána powers “to act swiftly to enforce the law” in this regard, where necessary, she said.

“This represents an unacceptable risk to human life and public health . . . It also undermines the efforts and sacrifices made by so many others in our society.”

“The vast majority of people and businesses in Ireland have complied with public health restrictions across the last six difficult months because they understand that doing so is the most sure way not just of keeping us all safe, but also helping us to return, as quickly as possible, to the more open society that we have enjoyed but can no longer take for granted. My firm belief is that this Bill will help to bring us further on that road,” she said.

The legislation gives gardaí powers to inspect licensed premises for compliance with public health regulations and to issue closure orders for a day where there is a refusal to comply. It allows for longer closures through application to the District Court, with closure of up to seven days for a first offence and up to 30 days for a second.

Labour TD Brendan Howlin expressed concern that the legislation “creates penalties for crimes that are not set out in the Bill”. Describing this as “very unusual”, he said they were penalising the failure to keep records of visitors to pubs but “we don’t know what else will be encompassed”.