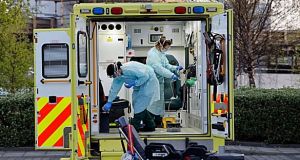 No new Covid-19 deaths have been reported for the past fortnight and just four occurred in the month of August. File photograph: The Irish Times

The current surge of Covid-19 can be successfully suppressed through people slightly reducing their daily contacts, public health officials have said.

Getting the R number below 1 is “absolutely realistic”, through a “marginal reduction” in the number of contacts people have each day, according to Prof Philip Nolan of the National Public Health Emergency Team. The R figure represents the number of people that one infected person will pass the virus on to, on average.

“It is a modest amount of extra effort that we have to do,” he said on Wednesday evening.

The reproduction number stands at 1 to 1.2, according to Prof Nolan, who is chairman of the Irish Epidemiological Modelling Advisory Group.

A reproduction number of less than 1 means an epidemic is dying out; a figure greater than that signals it is spreading.

“A close analysis of case numbers and patterns over the last week suggests that the epidemic is growing very slowly in many counties across Ireland, including Dublin. A large number of cases are associated with outbreaks in private houses and families,” said Prof Nolan.

The epidemic is “stable or growing very slowly. [But] It is still higher than we would like,” he said.

Community transmission, which doubled in mid-August to 20 cases per day, has remained stable over the past three weeks, he said.

Prof Nolan expressed concern about a rise in the number of patients requiring hospitalisation, now at 42, up from a low of under 10 one month ago. But admissions to intensive care, at eight on Wednesday, remain stable.

A further 89 confirmed cases of Covid-19 were reported by the public health emergency team today. This brings the total number of cases in the Republic to 29,114.

One further death was reported, but with an earlier death being denotified the total number of deaths remains at 1,777. Today’s fatality dates back to June.

No new Covid-19 deaths have been reported for the past fortnight and just four occurred in the month of August.

Dublin accounted for 53 of the new cases and Limerick for 15, with the remaining 21 shared between Clare, Cork, Kildare, Kilkenny, Laois, Leitrim, Longford, Meath, Offaly, Waterford, Westmeath, Wexford and Wicklow.

Of today’s infections, 56 per cent are associated with outbreaks or with close contacts of a confirmed case. Eight involve community transmission, meaning origin of the infection is unclear.

Asked about reports of children being sent home after a class-mate tested positive in a second Dublin school, acting chief medical officer Dr Ronan Glynn replied this was a part of the experience of reopening schools and he was unsurprised. Some 180 children up to the age of 14 have contracted the virus over the past fortnight.

Dr Glynn ruled out any early reopening of “wet” pubs, saying public health officials first need to gauge the impact of current restrictions to see if they help curb the current increase in case numbers.

A record 65,000 tests were carried out last week with a positivity rate of about 1.4 per cent, according to HSE chief clinical officer Dr Colm Henry.

Meanwhile, Ireland is now in the “most challenging phase” of dealing with the spread of Covid-19, according to a senior Government official.

Assistant secretary general at the Department of the Taoiseach Liz Canavan said the national shutdown was “simple to execute in many respects, notwithstanding the impact we knew it would have”, but Ireland is in a different phase now where we must live alongside the virus.

She was speaking as Health Service Executive chief Paul Reid warned that this is going to be “a more difficult winter than we’ve ever faced” as the HSE attempts to scale up services stalled because of Covid-19.

“We are living with Covid, we just have to take hope and confidence and live differently and plan differently,” he told RTÉ radio.

Community assessment hubs which had been established during the pandemic would be used during the winter to assess people for respiratory illnesses and filter out what is and is not Covid related, he said.

In relation to the Leaving Certificate, Ms Canavan said students “can be confident a huge amount of work has been done to deliver a calculated grades model which has equity and fairness at its core”.

“Under the calculated grades model, estimated marks for schools will be adjusted as planned to ensure that a consistent standard is applied in schools across the country when judging the performance of students. The model will not include data on how a school has historically performed at Leaving Certificate, placing a greater emphasis on the estimated marks provided by schools to individual students. This removes any risk that a Leaving Certificate student’s results can be impacted by the performance of Leaving Cert classes in his or her school in previous years,” said Ms Canavan.

But she acknowledged that there are concerns about how some schools are operating.

“The response to confirmed cases or outbreaks of Covid-19 in a school will be led and managed by the HSE . . . by their teams in the context of a full public health risk assessment.”

In Northern Ireland, two new coronavirus-related deaths were confirmed on Wednesday. This brings the North’s death toll to 562.

The North’s Department of Health also reported that 71 people had tested positive for Covid-19, taking the total number of confirmed cases to 7,365.

So far 237,003 people have been tested for the virus in Northern Ireland.