Varadkar points out Commission wants ‘a woman and a man, not a man and a woman’ 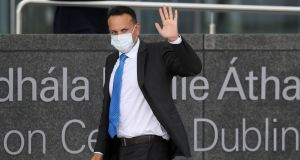 Tánaiste Leo Varadkar is also understood to have told TDs that 2020 has been the most disruptive year in Irish politics. Photograph: Brian Lawless/PA Wire

Tánaiste Leo Varadkar has told a meeting of the Fine Gael parliamentary party that he expects clarity on the nominations for the role of EU commissioner by the end of this week.

Sources present say Mr Varadkar was “at pains to point out that the Commission want a woman and a man, not a man and a woman. He outlined that clearly”.

The Fine Gael leader said he expected nominations to be formalised by the end of the week. Minister for Foreign Affairs Simon Coveney, who is under consideration for the role, also told the meeting that the issue should not be let “drift” and that the Government needs to get on with its work.

He also addressed the controversy surrounding the resignation of Phil Hogan, who stepped down in the wake of a controversial dinner he attended that was hosted by the Oireachtas golf society in Clifden, Co Galway. Mr Varadkar said that if Mr Hogan remained in his position, the debate over his movements in Ireland would still be ongoing.

Mr Varadkar said the debate would by now have moved on to what locations Mr Hogan gave when he filled out the mandatory passenger locator form, and that there would be pressure for that to be published.

Mr Varadkar is also understood to have told TDs that 2020 has been the most disruptive year in Irish politics and that there are still three months left.

Leo Varadkar is fourth minister to restrict movements after negative Covid-19 test 10:41
IRA chief of staff tipped off gardaí about Arms Trial guns, says Seán Haughey 09:36
Dublin ‘could go to Level 4 or Level 5’ if cases continue to rise 09:06
People aged 15-34 now account for 40% of Covid-19 cases 08:07
Should you consider a postgrad during the pandemic? 05:01