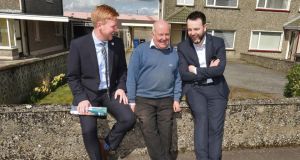 For an election candidate, Órfhaith Begley is in an enviable position. The Sinn Féin contender in Thursday’s West Tyrone byelection, her party won the single seat less than a year ago with more than 50 per cent of the vote.

While Begley is the first to say that she is taking nothing for granted, this is a constituency which has returned a Sinn Féin MP for the last 17 years; going by the numbers she will be hard to beat.

Yet these are not the circumstances of a year ago. In June 2017, her party colleague Barry McElduff was elected with more than 22,000 votes – 10,000 ahead of his nearest rival – in a snap Westminster election which saw turnout rise amid heightened tensions following the collapse of Stormont, controversy over an Irish Language Act and the Democratic Unionist Party (DUP)’s description of Sinn Féin as “crocodiles”.

If the circumstances of that election were unforeseen, then those surrounding Thursday’s byelection are even more so.

A video of McElduff posing with a loaf of Kingsmill bread on his head which was posted on Twitter on the 47th anniversary of the massacre of the same name – in which 10 Protestant textile workers died – led to widespread condemnation and his resignation.

At the time voters in Omagh – the main town in West Tyrone – were divided if it would affect Sinn Féin’s electoral prospects; even other candidates admit Brexit and Sinn Féin’s policy of abstention from Westminster are mentioned more often on the doorsteps than McElduff’s tweet.

Begley denies it has damaged Sinn Féin’s reputation in the constituency.

“Barry made an error of judgement, albeit unintentional, but he did realise hurt was caused to victims, so he tendered his resignation because he did not want to become a barrier to reconciliation.

“On the doors I’ve received nothing but positive feedback – people are glad to see a new face and a new voice for this new era,” she said.

A 26-year-old lawyer, she is indeed a new voice in politics in the constituency – albeit one with impeccable republican credentials. From the party heartland of Carrickmore outside Omagh – also McElduff’s home town – she is the daughter of a former Sinn Féin councillor and has worked on a number of election campaigns.

Central to this campaign is Brexit. A largely rural constituency, West Tyrone has a long Border with the Republic, and voted by two-thirds to remain in the EU.

Begley argues that Sinn Féin is at the heart of negotiations with the EU, and is “already shaping policy” by pushing forward the case for designated special status for the North.

Other parties have long criticised the party’s failure to take its seats in Westminster, with rival candidate Daniel McCrossan from the SDLP saying the election is “fundamentally about providing representation at a critical time”.

“People on both sides of the Border have been coming to us seeking some certainty,” says McCrossan. “The importance of this election is such that it isn’t just about West Tyrone, it’s about the entirety of the North.

“Sinn Féin’s abstentionism prevents us from having representation at Westminster – which is more vital than ever before – but this election means that, potentially, there could be a voice for all those who voted Remain in Northern Ireland. ”

The DUP candidate, MLA Thomas Buchanan, also makes the case that this byelection is about representation, though he refutes any suggestion that his party’s pro-Leave stance on Brexit might limit its potential vote in this pro-Remain Border constituency.

“For the last 17 years we’ve had no voice in Westminster because the Sinn Féin MPs don’t take their seats,” says Buchanan. “That’s left us as a constituency dragging behind.”

However, Begley argues that Sinn Féin has already been shaping Brexit negotiations.

“We’ve been to Brussels, and have been negotiating with the EU 27, and we will continue to be influential to negotiate a good deal. “West Tyrone is a Border constituency, we’re about two-thirds rural, so it’s vital that special status is given to the North so that we can remain within the customs union and the single market.”

If Begley is indeed the “new voice” for the constituency, the reality of Brexit means that whatever the changes of the last 12 months, many further challenges lie ahead.

On election night, says McKay, all eyes will be on the turnout.

“They would have to be worried if the nationalist turnout goes down in the midst of such huge political challenges,” he says.