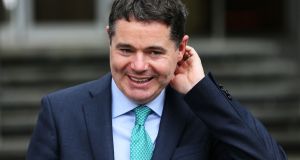 Minister for Finance Paschal Donohoe is confident the Government’s majority stake hold (71 per cent) in AIB will ensure that a board proposal to reintroduce executive share bonuses will not succeed at the bank’s AGM today.

“My view is that Government policy as it stands now is right, we have a very clear policy of no bonuses, a cap on certain forms of compensation and a very high tax level for additional forms of pay,” he told RTÉ’s Today with Sean O’Rourke show.

“That’s going to stay as it is. I have acknowledged that it is possible in the future that the context for bank pay could change, as we’re going to see more and more companies moving to Ireland as a result of Brexit, who will not be subject to wage policy the way I can implement wage policy on our three banks.

“For that reason it is a matter we should look at, we should review, but it’s not up to banks to determine wage policy,” he said.

“The Government has a wage policy for certain executives, and we will determine what it is now and in the future.”

Current pay caps and bonus restrictions, introduced in 2009, months after the State guaranteed the sector, remain in place, pending the outcome of an external review, expected to be completed by the end of the year, Mr Donohoe said.

The Minister said although he respected the right of the board of AIB to bring forward the resolution at the AGM today, he will be voting against it.

“I understand why they’re doing it. I’m voting against it today, and all other things being equal it will be defeated.

“This shows my determination to implement policy, but it is also something that might need to be reviewed in the future if circumstances change in the future,” the Minister said.

The AGM resolution would have allowed AIB to establish a deferred incentive scheme, starting in 2019 and benefiting up to 100 top employees. The deferred shares, exercisable after five or six years, would have amounted to the equivalent of 100 per cent of annual salary.