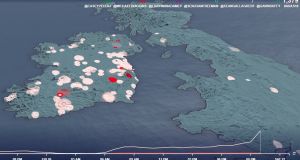 There was a spike in tweets at 10pm on Friday when The Irish Times exit poll was published. Visualisation: Vincent Ryan

The debate last Tuesday drove the most Twitter activity surrounding the presidential election, according to an analysis of the social media platform.

The visualisation here (follow this link if you are reading this on The Irish Times app) shows how tweets using the #Aras18 hashtag spiked, generating about 4,000 mentions around the Prime Time debate broadcast on RTÉ One.

Some 885,000 viewers tuned in at some point during Tuesday night’s presidential debate on RTÉ One.

The visualisation shows where those tweeters were located based on information in users’ bios. It also shows where tweets mentioning each candidate came from

There is a notable increase is activity towards the closing of polling on Friday with the rate of people tweeting increasing to around 1,000 tweets per hour from about 7pm-10pm, when polls closed and when The Irish Times published its exit poll correctly predicting the result.

Use the arrows in the top left to move to a new visualisation and pause button on the bottom left.