Presidential face: Would you be able to identify the candidates?

Conor Pope asks the public if they can identify any or all of the candidates in the upcoming presidential election. 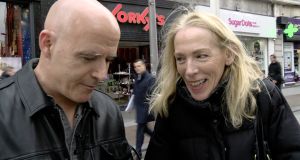 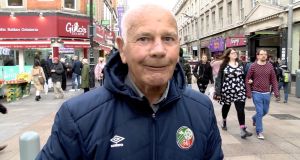 Níl fhois agam: Conor Pope chatting to members of the public about the candidates in Dublin city centre 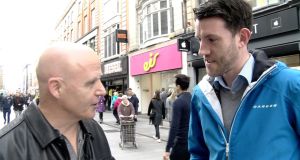 This man was the only person we approached who could name all the candidates and the First Dogs.

With the presidential election upon us, how have the candidates fared when it comes to getting their message across to the voting public?

Not too well if the vox pop we conducted on the streets of the capital earlier this week is anything to go by.

Not only have the candidates have struggled to sell their vision of the presidency, they appear to struggled to share their vision of themselves. Most of the people we spoke to admitted that they would be unable to pick out all but one of those whose names will appear on the ballot. But rather than take people at their word we decided to put them to the test.

Armed with seven photographs - of the six candidates and the President, Michael D Higgins’s two Burmese Mountain Dogs (because they played an unexpected role in the debate in the run-up to election day ) we set off for Dublin’s Henry St and then to the gates of Trinity College to see how many of the candidates people would be able to identify.

We spoke to more than 15 people and only one person was able to identify by name all six candidates and the two dogs.

A couple of others who took on the challenge were able to identify all the candidates although they struggled when asked to name the president’s dogs and a couple more had an idea who some of those who have put their name forward were but were unable to name them.

What was striking - and a somewhat depressing indictment of the campaign - was the fact that the vast majority of those The Irish Times spoke to were unable to identify more than two of the candidates by name and a many of those we approached only recognised a single candidate - Michael D Higgins.