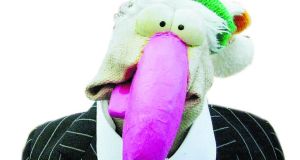 One Meath East voter showed a preference for Dustin the Turkey when voting in the presidential election. File photograph: Alan Betson

US president Donald Trump, former taoiseach Bertie Ahern, Dublin football manager Jim Gavin and Dustin the Turkey were among the vote-getters in the presidential election.

They may not have been candidates but they were the preferred options for a number of frustrated or annoyed voters who chose to spoil their votes by writing a non-candidate’s name on the ballot paper. Others used the vote to protest at abortion becoming law.

Journalist and would-be candidate Gemma O’Doherty secured spoiled votes in a variety of constituencies, including 50 in Dublin West. “She’s giving Gavin Duffy a run for his money,” a count official quipped.

Ms O’Doherty received a county council nomination from Laois to run for the presidency, but was three short of the four nominations required to contest the election.

In Dublin North-West one ballot paper was scrawled with the words “Freedom of Choice”, with Ms O’Doherty’s name written underneath. She also secured a number of votes in Donegal.

One voter spoiled their ballot paper by writing “no abortion in Donegal”.

Others chose Mr Ahern, with one voter writing “would prefer Bertie, 2025?” on their ballot paper, while another wrote “Trump, Donald 1”, with a drawing of a stickman beside it.

Another voter wrote “Jim Gavin Up the Dubs”.

And children’s television star Bosco got a number one vote in the Bealnamulla box in south Co Roscommon.

Another voter in the same village crossed out all the names and wrote: “You are all willing to sign abortion into law. Shame on you!!!”

A number of votes are spoiled by people leaving their ballot blank or by ticking all boxes. Votes can also be spoiled by the ballot paper not being officially stamped by polling station staff.

But in many cases people chose to protest by choosing a non-candidate or expressing a view on their ballot paper.

Wicklow recorded a total of 542 spoiled votes. Some were scrawled with remarks such as “all useless”, “no to everybody” and “no to abortion” – in what is the constituency of Minister for Health Simon Harris.

One Meath East voter showed a preference for Dustin the Turkey, while another favoured Liverpool striker Mohamed Salah. Mr Trump also featured there, as he did in a number of other constituencies.

Comments on other spoiled votes in the constituency ranged from the polite “no thanks” to “they’re all sh***e”, and included “none of the above” and “waste of time”.

Spoiled votes in western constituencies included one ballot paper with a vote cast for Donald Trump from a box in Ballindine, south Co Mayo.

Other messages on ballot papers which had to be discounted ranged from “waste of money” to several anti-abortion sentiments. A number of papers had “Christ is King” and other religious messages inscribed.

Tally volunteers also noticed that indelible marker was used on some papers, rather than the pencil provided at polling stations.