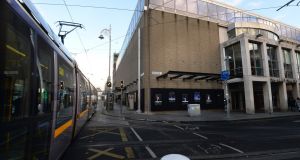 Minister for Culture Josepha Madigan is to write to all stakeholders in the row over commitments made by the Abbey Theatre (pictured) to produce new and in-house dramas, in an attempt to find a ‘palatable’ solution. File photograph: Dara Mac Donaill/The Irish Times.

Minister for Culture Josepha Madigan is to write to all stakeholders in the row over commitments made by the Abbey Theatre to produce new and in-house dramas, in an attempt to find a “palatable” solution.

Ms Madigan told the Dáil that she had closely followed the situation at the theatre and had been updated on all the discussions.

“Considerable progress has been made but some issues still need to be sorted out,” she told Fianna Fáil culture spokeswoman Niamh Smyth, who had said that “Irish artists should not be side-lined by our national theatre”.

Initial warnings in January about an over-reliance at the Abbey on staging co-productions, fewer actors being directly employed and fewer in-house productions led to detailed and lengthy consideration of the issues by the Oireachtas culture committee.

Pledges were made but Ms Smyth said “it seems the commitments made by the Abbey Theatre at the time to employ actors directly and to produce new works have not come to fruition”.

Ms Madigan said there had been significant progress but a number of issues remained to be dealt with. “I will write to the Abbey Theatre, to the theatre practitioners and to the Writers Guild of Ireland to see if we can find a solution that is palatable for everybody,” she added.

Ms Smyth referred to a report in The Irish Times about “a crisis in the theatre world and dwindling opportunities for artists who are being squeezed out of the frame by disappearing venues, rising rents and faltering subsidies”.

Earlier this week, representatives of 427 actors, directors, designers, technicians and producers wrote to the Minister accusing the Abbey of reneging on a commitment to produce more plays in-house and more new Irish drama and stating that they had no confidence in the theatre’s board.

The letter said the Abbey’s 2020 programme did not address concerns first voiced in January when 311 theatre professionals signed a letter to the Minister protesting about the effect of a significant increase in co-productions and a reduction in self-produced plays.

The letter claimed the Abbey committed to produced more in-house shows and pay Abbey rates for workers on co-productions but that the programme offered just 38 direct employment opportunities - the “lowest figures as yet offered by our National Theatre”.

Ms Smyth added that in March Theatre Upstairs, a venue committed exclusively to new work, said it was closing after nine years of operations and last month the Collapsing Horse theatre company announced it was “calling it a day”. She said theatre was a “seedbed for rising artists” and such seedbeds needed to be supported.

The Minister stressed the importance of public and Government support for the theatre sector and said she had been involved in a number of initiatives to strengthen the sector. These included gender policies for 10 of Ireland’s most important theatre companies, an €80 million redevelopment programme for the Abbey and €250,000 for amateur theatre, drama and musical societies, the first such grants in more than a decade.