Drones to be used to tackle ‘environmental treason’ of dumping 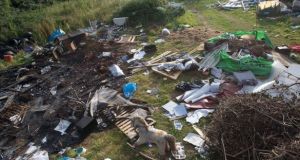 Local authorities and community groups can apply to this fund for support. The fund was set up last year to tackle illegal dumping.

Mr Naughten said his department was targeting the “man with the van” who was collecting waste without a permit and then illegally dumping.

He said the Revenue Commissioners, An Garda Síochána, and the Department of Social Protection would be working together to tackle bogus waste collectors, who operate unofficially and advertise their services online or through leaflet drops.

The Minister advised householders to ask to see the licence permit of any individual offering to collect and dispose of waste.

The Department of Environment is also reviewing legislation around the prosecution of those dumping waste illegally.

“If a mattress or a tyre is thrown on the side of the road, very quickly you see a bag of refuse is dumped there, and all of a sudden it becomes an illegal dump,” Mr Naughten said.

Speaking at the launch of the initiative, Minister for Rural and Community Development Michael Ring said illegal tipping was a blight on rural Ireland.

Greater follow through in prosecuting individuals was required from local authorities, he said.

Mr Ring said he was “very happy” with the draft of the National Planning Framework, due to be announced on Friday by the Government.

“I know tomorrow the people of rural Ireland will be happy with the plan,” he said on Thursday.

“There will be people looking for the negativity and we expect that, we expect the Opposition to be trying to look for things that are not in it,” he said.