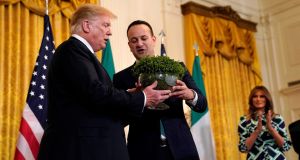 I have always believed that history is the study of the future.

It reminds us of where we have come and points the way to where we must go next.

Throughout history, the holders of your office have defined the destiny of this great country in times of certainty and in times of crisis.

President Washington helped to create America and showed the world what freedom meant and how democracy worked.

President Lincoln preserved democracy and proved that freedom had no limits.

Your ambition is to make America Great Again, and we can see the results today.

The American economy is booming. More jobs. Rising incomes. Exactly what you said you’d do.

However, I believe the greatness of America is about more than economic prowess and military might. It is rooted in the things that make us love America: your people, your values, a new nation conceived in liberty. The land and the home of the brave and the free.

‘We hold these truths to be self-evident that all men are created equal and are endowed by their creator with certain unalienable rights - life, liberty and pursuit of happiness.”

‘A nation… dedicated to the proposition… a government of the people, by the people, for the people shall not perish from this earth.’

Mr. President, the promise of America inspired those seeking liberty and freedom around the world, including in my own country.

We too were inspired by women such as Susan B. Anthony and Rosa Parks, Rachel Carson and Marsha Johnson, who changed forever the way we view each other and the world around us.

- They sang the same songs

And we know and trust, that making America Great Again will not mean fighting or losing sight of what makes it great already.

People around the world have been inspired by America and have travelled here to make them their own.

And people came, including millions from Ireland who were among the hands that built America.

Some made the opposite journey, and still do, and we welcome them without conditions.

Mr. President, our history is shared, our future is entwined.

And so I believe that future generations of our citizens should have the same opportunity to enrich one another’s societies as past generations have.

No nation with as many ties as Ireland has to the United States has so few pathways to legal immigration. Whenever we’ve talked about this we’ve found agreement.

And, I want to thank you and Congress for your support for a new E3 visa programme, which would allow a limited number of Irish people to come here annually.

Mr. President, today, Ireland has taken her place among the nations of the world.

A proud member of the United Nations, acting as a force for good around the world.

Secure of our place in the EU, the common European home we helped to build.

A gateway to the Atlantic world and, I hope, a bridge between Europe and America.

At this point in our history, Mr. President, we want to further deepen the economic ties between our nations.

Decades of investment by US firms in Ireland have helped transform Ireland from one of the least developed in Europe to one of the most prosperous: a budget surplus, record number of people at work, lower income taxes, rising wages, poverty and deprivation down.

We thank you and will never forget your role in making that economic transformation possible.

Today, however, our economic relationship is very much a two-way street. One hundred thousand Americans across 50 states are employed in Irish-owned companies with more jobs to come.

119 Irish firms have invested here since you took office.

Investment by Irish companies in the United States has trebled in recent years.

Jobs and trade are going in both directions.

Free trade and free enterprise make everyone better off in the round. Let’s keep it that way.

Mr. President, Ireland is part of that endless chain, and we are proud of our links to your country. We love America and the promise of America.

And we know that making America Great Again, will not mean forgetting or losing sight of what makes it great already.

And so, Mr. President, in the spirit of our long shared history and friendship, it gives me great pleasure to present you with the shamrock bowl.