Varadkar’s slide in popularity shows no sign of stopping 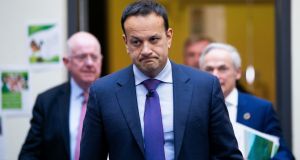 What a contrast to Friday’s European Parliament elections poll, which heralded Fine Gael poll-toppers sweeping all before them in the forthcoming election.

The news a day later from the Irish Times/Ipsos MRBI poll is considerably more worrisome for the party. Euro elections are beauty contests in which high-profile candidates, especially incumbents, have a particular advantage. General and local elections are about the more mundane matters of politics and policy – making a difference in people’s daily lives. That is proving to be a much tougher struggle for Fine Gael.

After a brief Icarian period in late 2017 and early last year, Taoiseach Leo Varadkar has definitively fallen to Earth, seeing his personal rating dive again in Saturday’s poll. What will worry Fine Gael is not so much that Varadkar is not as popular as he was in the period after he became Taoiseach – that much was predictable – it is that the decline in his popularity shows no sign of stopping.

It’s one thing being as unpopular as Micheál Martin; but what if he was more unpopular?

Satisfaction with the Government has also tumbled. Fine Gael support – when respondents were asked how they would vote in a general election – slips marginally but while a point up or a point down won’t worry anyone, it looks as if something else is happening here.

The trend, the trend, the trend: Fine Gael support has tumbled from 36 per cent in December 2017 to 34, to 31, to 30 and now to 29. All falls individually are within the margin of error but taken together are evidence of a movement among voters that will worry those in Government Buildings.

By way of comparison, the last time the Government was at this level of satisfaction was around the 2016 general election – when the coalition partners, Fine Gael and Labour, lost oceans of seats.

A general election which began with these sort of numbers would represent a stiff challenge for Varadkar and his party. Fine Gael TDs were banking heavily on a Varadkar X-factor propelling the party forward. That could yet surface on the campaign trail (though so could the opposite) but it is likely that an election would be decided by the more prosaic matters of policy, campaigning capacity, track record and credible plans for the future.

The gap between Fine Gael and Fianna Fáil – on the evidence of Saturday’s poll numbers – has never been tighter in the period that Varadkar has led his party.

The immediate contest, however, is not a general election, but local and European elections in a fortnight’s time.

The Irish Times/Ipsos MRBI poll also asked specifically about local election voting intentions. The results, excluding undecideds and those unlikely to vote, were: Fine Gael, 27 per cent; Fianna Fáil, 25 per cent; Sinn Féin, 15 per cent; Labour, 7 per cent and Independents and others, 26 per cent.

The poll also asked people why they voted for particular candidates in the local elections, offering them a series of statements. The most popular choice of those offered was that the candidate was “from the local area” which was selected as the “most important reason” by just under a third (31 per cent) of voters.

After that, three other reasons were closely grouped together. “They belong to a party or group I support” was the most important reason for 18 per cent, while “I’ve always voted for them” was also favoured by 18 per cent. A fifth of voters (20 per cent) said their choice of candidate was “because of where they stand on a particular issue”, while 9 per cent said they wanted to “send a message to the Government”.

The results stress the importance of localism, party affiliation and personal loyalty in our local political system.

Taken together with the European elections poll published in The Irish Times on Friday and there is something for most parties in these numbers.

Fine Gael and its leader may be under pressure, but they can look forward to a good Euros and a decent local elections. Fianna Fáil is closing the gap with its great rival. Labour is showing some signs of life at last. The Greens may be seeing the start of a climate change bounce.

The only party for whom the news is almost universally bad in these numbers is Sinn Féin – under pressure to keep its seats in the European Parliament and slumping in the national party figures. If these numbers are borne out on May 24th, the weekend could be a difficult one for Mary Lou McDonald.

Opposition withdraw from Dáil business committee as McEntee row deepens 20:56
Covid-19: Museums, cinemas set to reopen next week as Varadkar warns of New Year restrictions 20:17
Tánaiste says third short period of Covid-19 restrictions may be needed in New Year 20:08
Brexit: Rush for last-minute deal to let sausages into North 20:07
Fines of up to €500 introduced for breaches of Covid-19 regulations 20:04