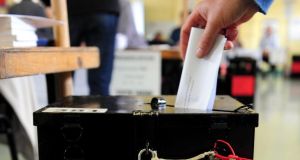 If approved, the referendum will amend the Constitution to remove the requirement that couples must be living apart for four of the previous five years before they can be granted a divorce.

Voters are poised to overwhelmingly approve the proposed referendum on divorce, paving the way for removing the restrictive regime put into the constitution when the ban was lifted more than 20 years ago.

Stripping out the undecided voters and those unlikely to vote, the proposal enjoys the support of 91 per cent of respondents to the poll, with just 9 per cent ready to vote against it.

The poll was taken on Tuesday, Wednesday and Thursday of this week among 500 voters in each of the three European Parliament constituencies, a total of 1,500 voters across 150 sampling points in all constituencies. The accuracy is estimated at plus or minus 2.5 per cent at the national level.

If approved, the referendum will amend the Constitution to remove the requirement that couples must be living apart for four of the previous five years before they can be granted a divorce.

The Government says it will propose legislation in the Oireachtas to legislate for a two-year separation period before a divorce can be obtained, a measure backed by all parties and likely to be comfortably voted through the Dáil and Seanad.

The referendum also proposes to remove restrictions on the recognition of foreign divorces in the Constitution, allowing legal changes which would recognise such divorces under Irish law.

Support for the measure is strong and consistent among all parties’ voters, urban and rural voters, and all social classes.

Voters over 65 are the least likely to vote Yes but even here more than four out of five voters (81 per cent) who expressed a preference and are likely to vote said they would back the changes.

Support is strongest in Leinster outside Dublin at 94 per cent in favour and among the wealthiest AB voters at 95 per cent.

The measures were inserted in the Constitution when the ban on divorce was removed in a 1995 referendum. Then, politicians felt that the public, nervous about change, would back the legalisation of divorce only if it was in a restrictive form. In the event, the legalisation of divorce was approved only by a wafer-thin majority in that referendum. The poll today suggests that the public mood has moved very substantially in the intervening period.