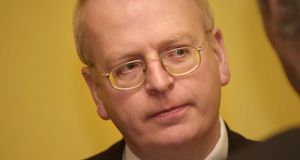 An alternative amendment to the Constitution that would deal with abortion in cases of rape and incest would be unworkable, two former attorneys general and an ex-Supreme Court judge have said.

John Rogers SC, Michael McDowell SC and Ms Justice Catherine McGuinness said so-called “hard cases” can be dealt only by repealing the Eighth Amendment, which gives equal right to life to the mother and the unborn.

Mr McDowell also said that if the Amendment is not repealed in the referendum on May 25th, people who purchase abortion pills are liable to be prosecuted.

“People will commit offences and they will be liable to be criminally punished,” he said, adding that a girl could be sent “before a court because she has availed of the abortion pill”.

They were speaking at an event in Dublin organised by Lawyers for Yes, which is part of the wider Together for Yes group.

The belief that “hard cases” – such as rape, or incest – can be covered by a new Constitutional amendment will not work because action could not be taken quickly enough.

The “equalisation of rights” in the Eighth Amendment “has inevitably led to the courts being drawn into deciding when women’s [health and] lives are to be protected”.

Ms McGuinness said she had encountered hypocrisy from some on the No side who said they approve of women travelling for an abortion. Currently, Irish women are “forced to flee abroad or forced to take pills they may have got from the internet”.

“Here we have all these women who are treated this way and we are supposed to turn a blind eye to that?”

The creation of the abortion pill has changed everything, said Mr Rogers, a former Labour AG: “In effect, to use it is to carry out an unlawful act under the Constitution,” he said.

Rights of the unborn

Meanwhile, former Chief Justice Ronan Keane, writing in today’s Irish Times, disputed the contention that all rights of the unborn will be extinguished if the referendum is passed.

That view, which rests on a recent judgment of the Supreme Court, has been relied upon by anti-abortion campaigners, who have warned that all the rights of the unborn are threatened.

However, Mr Justice Keane, who was Chief Justice between 2000 and 2004, argues it would be open to a future court to rebalance rights , effectively recognising rights for the unborn outside the existing article 40.3.3.

“Having spent a large part of my life as a barrister and judge, I have learned to be wary of forecasting what courts might or might not decide,” Mr Justice Keane says that

“It will be open to the courts . . . to hold that any provisions enacted under the new Article 40.3.3 must strike the correct balance between the right to life of the unborn and the constitutional rights of the mother, including, not merely her right to life, but also her right to health, bodily integrity, privacy and personal autonomy.”

Control of abortion should be entrusted to the Oireachtas, subject to the jurisdiction of the courts, which would be an “ appropriate response to an admittedly complex problem in a mature democracy.”

He was replying to a letter to The Irish Times by retired Judge Bryan McMahon, who said that if the Eighth Amendment is excised from the Constitution, there will remain no constitutional protection for the unborn.

Other former senior judges, including Iarfhlaith O’Neill, a former High Court judge, who was chairman of the Referendum Commission during the Lisbon Treaty, and Aindrias Ó Caoimh, a former High Court and European Court of Justice judge, have also argued that the Government’s proposals would “open the door to abortion in wide-ranging circumstances”.