US president optimistic over stalled visa scheme for Irish

President Trump reacts to President Higgins statement that the US pulling out of the landmark Paris Agreement on climate change was “regressive and pernicious”. Video: Reuters 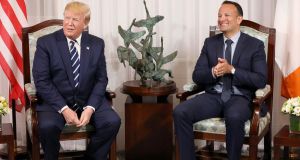 Hopes that thousands of Irish citizens could gain access to a new class of visa have been raised after US president Donald Trump said he intervened with those blocking the stalled proposal in the US Congress.

The E3 visa scheme, which passed the House of Representatives last year but failed to get the required, unanimous support of the Senate, was discussed at the bilateral meeting between Taoiseach Leo Varadkar and Mr Trump in Shannon Airport yesterday.

Mr Varadkar said the issue of Ireland’s trade surplus with the US was also raised.

Arkansas senator Tom Cotton blocked the E3 Bill that would have allocated a proportion of visas – currently only available to Australians – to Irish citizens. Mr Trump, in his first public comments on the matter, said he had spoken to Mr Cotton.

“I spoke to the one vote – who’s a great senator, by the way,” he told reporters ahead of the meeting. “And we think we’re going to be successful.

“He doesn’t mean to do any harm – that I can tell you,” Mr Trump said of Mr Cotton. “He was telling me he loves Ireland, actually. So I think we’re going to be in good shape.”

John Deasy, the Government’s special envoy to the US Congress, has been liaising with Mick Mulvaney, Mr Trump’s chief of staff, on the E3 Bill. Applicants for an E3 visa must have a job in the US to qualify and have certain academic or other qualifying credentials. The Bill was reintroduced in the House of Representatives last month by Richard Neal, the chairman of the Ways and Means Committee.

Those who attended the bilateral meeting at Shannon Airport included Steve Mnuchin, the US treasury secretary; John Bolton, the national security adviser, and Mr Mulvaney.

Last week, the US treasury placed Ireland on a list of nine countries it is monitoring for running a trade surplus with the US.

Along with countries including Germany, Ireland, among EU countries, has one of the largest trade surpluses with the US, meaning that it exports more to the US than it imports, mainly due to the large presence of US multinationals here, and in the export-heavy pharmaceutical sector.

He said they also talked about the taxation of large companies.

“I emphasised very much our view that tech companies in the tech sector, the pharmaceutical sectors, are very welcome in Ireland. But I also expressed the very strong view that the Irish Government has which is that big companies that make big profits should pay their fair share of tax.”

Meanwhile, Mr Trump’s nominee to become the next US ambassador to Ireland, Ed Crawford, is expected to be confirmed by the US Senate next week.

Mr Trump will travel to Normandy, France, on Thursday for events to commemorate the 75th anniversary of the D-Day landings before returning to his resort in Doonbeg, Co Clare, resort that evening. He is expected to play golf at the resort on Friday before returning to the US in the afternoon.