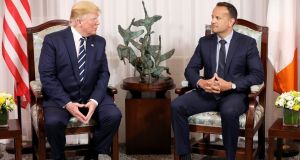 The US has been pressurising countries where Huawei operates to reconsider their relationship with the telecoms giant amid concerns in Washington that China could be using technology to spy on rivals.

Addressing the issue ahead of his meeting with Mr Varadkar, Mr Trump said the United States deals “very closely” with Ireland’s intelligence and security on the matter.

“We’re working on that together, and I know you’re concerned like we’re concerned. We’re all concerned about it,” he said.

Mr Varadkar intervened to say that Huawei was also “something that the Irish Government is concerned about as well”. He said the Government had been offered some further briefings and information from the US side on the security issue, and would do their own security analysis first.

The Taoiseach later said the issue was dealt with only in the press conference, and not during his meeting with Mr Trump which was also attended by national security adviser John Bolton and treasury secretary Steve Mnuchin.

Mr Trump was also asked by reporters about his views on Brexit and its impact on the Border. The US president downplayed concerns about the possibility of a return of a hard border when Britain leaves the European Union, appearing to compare the Irish border issue with his proposed wall with Mexico.

“It will all work out very well. . .for you, with your wall, your border. I mean, we have a border situation in the United States, and you have one over here,” he said. “There are a lot of good minds thinking about how to do it. . . it’s going to be just fine.”

Noting that the first thing that will happen in Britain is the appointment of a new prime minister, he said: “I know one thing: Ireland is going to be in great shape. Ireland is, you know, a special place. It’s going to be in very good shape. I don’t think the Border is going to be a problem at all.”

Following his meeting with Mr Trump, Mr Varadkar said he had raised Ireland’s concerns about the Border with Mr Trump directly.

“He understands that it has to be a shared objective, that if the UK is going to leave with a deal, then that deal must involve legally operable guarantees that won’t involve a hard border between north and south.”

Mr Varadkar also said he believed Mr Trump was not backing one particular candidate for the Conservative leadership campaign in Britain, and had “some good things to say” about both Boris Johnson and current foreign secretary Jeremy Hunt.

Asked if he agreed with claims by President Higgins that the US stance on climate change is “regressive and pernicious”, he said: “I disagree with the decision of the US to pull out of the Paris accords. Climate action is something everyone in the world has to work together on. . . Big countries like the US and China have to be part of this as much as small countries like Ireland.”

However, he noted that Ireland was still playing catch-up when it comes to our climate obligations.

“I’d like us to do more to meet our obligations, our 2030 targets. . . Climate is not an area where we have a lot of credibility at the moment and that’s something we need to change.”

Covid-19: Tony Holohan predicts as many as 1,000 deaths in January 12:41
Covid-19 patients in hospital remain at high levels as lockdown extension expected 12:13
Everyone in Ireland to get Covid-19 vaccine by September, Minister for Health says 12:12
Inspector who highlighted mother and baby homes to be remembered through scholarship 11:07
Mandatory travel quarantine should be introduced by Ireland, experts urge 09:58