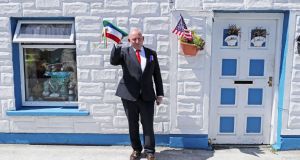 Trump supporter Paul Markham awaits the arrival of the US President in the village of Doonbeg in Co Clare. Photograph: Niall Carson/PA Wire 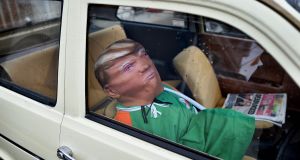 A dummy of Donald Trump sits in a parked car as Doonbeg prepares for the visit of the US president. Photograph: Charles McQuillan/Getty Images 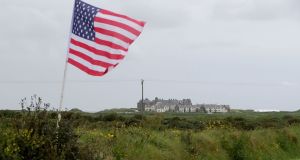 A US flag flies in front of Trump International Golf Links and Hotel at Doonbeg. Photograph: Niall Carson/PA Wire

Locals near Donald Trump’s golf resort in Doonbeg were on tenterhooks on Wednesday wondering whether the US president would drop down to the west Clare village during his visit.

“It would be like winning the lottery if he does,” said publican Tommy Comerford, sitting at the bar of Tommy Tubridy’s pub across the road from his own on Doonbeg’s Main Street.

“My gut feeling is that he will come down,” said Comerford, asking for the radio to be turned up behind the bar so he can hear the latest news report on Trump’s planned arrival at Shannon Airport.

The village is abuzz in anticipation of his possible arrival.

On Wednesday afternoon, Doonbeg is hosting traditional Irish music and dancing sessions on the Main Street, free pony and trap rides and free paddle boat rides on the river that flows through the village.

All the pubs in the village will hold music sessions on Wednesday evening in the hope that a certain VIP might venture down from the Trump International golf resort a 10-minute drive up the road.

“We have never seen so many cars around. There is a general air of excitement and the fact that there is so much media attention on the area is unbelievable,” said Comerford.

“We had a friend from Moneygall ringing us to let us what to expect because of what Obama did for their village. The difference here is that we have investment from the Trump family.”

Behind the counter at Whelan’s foodstore and deli, Audrey Reidy hopes Trump will drop into the village during his three days at his resort but does not expect him to leave his car if he does.

“Locals will be out with their flags cheering them on,” she said.

Her biggest business so far has been from the dozens of gardaí dispatched to Doonbeg for the presidential visit.

“It is good business for us. You feel extra safe,” said Reidy, whose home in the nearby village of Cree lies under the flight path for Trump’s Marine One helicopter from Shannon to Doonbeg.

She excitedly showed The Irish Times video footage that she captured on her phone of the presidential chopper and two other US military helicopters on a dummy run on Saturday .

“We would have nothing without him. We’d be gone off the map,” she said of the importance of Trump’s investment in the area.

Darragh Burns (15), enjoying an ice cream at Whelan’s after completing his Junior Cert English exam at Kilkee Community College, said he had written in the paper about how people “should not be giving out about Trump” when he was creating jobs locally. It was in response to an exam question about what he disagreed with.

“We want to keep our kids as long as we can in this area,” said his mother Dolores, praising the Trump family’s investment.

‘He gets things done’

A group of golfers from Dublin, two men and three women, who only wanted to be identified as “the Fallon clan,” played Trump’s course at Doonbeg on Monday. Dozens of gardaí emerged from nowhere on the 18th hole after they finished their round, they said.

“He gets things done,” said one of the women in the group, admiring Trump. “I would put him and Michael O’Leary in the same boat.”

“We need someone like him with Clare Daly and Mick Wallace going off to Europe, ” said one of the men, with a laugh.

Local man Murt McInerney, sitting outside the Wild Atlantic Break cafe in the Co Clare sunshine, seemed nonplussed by the massive security presence in his home village and the dozens of gardaí passing by.

He counted 25 members of the force between his house and the church on Wednesday morning. “It is a bit of overkill but sure if anything happens, you would be worried,” he said.

He is later joined by Paul Markham, from the nearby village of Kilmurray McMahon. He has travelled to the village to welcome the Trump family on this “great occasion.”

Markham is wearing a brilliant red tie, Trump’s favorite type, and a St Patrick’s Day hat that he bought for €5 and repurposed for the presidential visit in the red, white and blue of the American flag.

His neighbours, the Morrisseys in Kilmurray McMahon, helped him make it.

“It took a few hours but it was worth it, like,” he said.

Trump’s acting chief of staff enjoyed dinner in Morrissey’s pub, owned by a distant relative of Trump’s Vice President Mike Pence, Hugh McNally. He was out in the village ahead of an expected appearance by Mr Trump’s sons Eric and Donald jnr to visit the pubs in the village.

Brendan Murphy, director of membership at Trump Doonbeg, told The Irish Times that the president was in “great form” when he arrived off Marine One at Doonbeg and that he praised him for how well membership was going at the club as they lined up to greet him on the president’s arrival.

Brian Shaw, the club’s professional, said Mr Trump was full of talk about their game of golf on Friday when the president and the resort’s manager Joe Russell take on Mr Shaw and Mr Murphy.