Donald Trump expects Ireland to be in ‘great shape’ after Brexit

President Donald Trump and his wife Melania have been greeted by Taoiseach Leo Varadkar after landing at Shannon Airport. 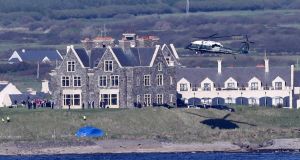 US president Donald Trump has said he believes Ireland will be left in “great shape” after Brexit and the Border will not be a problem.

Mr Trump is spending the night at his Doonbeg golf resort in Co Clare after holding a bilateral meeting with Taoiseach Leo Varadkar following his arrival at Shannon Airport for his first visit to Ireland since becoming US president.

Mr Trump and his wife Melania were greeted by Mr Varadkar when they landed shortly before 4.45pm. The two leaders then had a meeting in the airport’s VIP suite.

In comments to the media gathered at the airport before the meeting, Mr Trump said “it’s an honour to be here” with “his friend” Mr Varadkar, who he added was “doing a great job as prime minister”.

“We love the Irish,” he continued.

Mr Varadkar said it was a great honour to welcome Mr Trump to Ireland.

Around 200 people attended a protest outside Shannon Airport opposing Mr Trump’s visit. There was a large Garda presence at the scene for the duration of the demonstration.

Mr Trump expressed confidence that a deal on extending the E3 visa scheme to Irish people would be reached in the future. He also answered questions about “low” corporation tax rates, Chinese telecoms firm Huawei, North Korea and his Doonbeg golf resort.

Meanwhile, sources in Washington have told The Irish Times that Mr Trump’s nominee to become the next US ambassador to Ireland, Ed Crawford, will be confirmed by the senate next week. The US has not had an ambassador in Ireland for more than two years.

On Brexit and the Irish Border, Mr Trump said a new UK prime minister would be in place when Brexit was dealt with but that “I know one thing, Ireland is going to be in great shape. I don’t think the Border is going to be a problem”.

Mr Varadkar responded by saying Ireland wanted to avoid a hard Border or a wall.

The US president said he had not heard about President Michael D Higgins’s comments about his stance on climate change being “regressive and pernicious”.

However, Mr Trump added “we have the cleanest air in the world in the United States and it’s gotten better since I became president...”.

Mrs Trump attended an Irish cultural showcase at the airport, at which she was hosted by Minister for Culture Josepha Madigan, while the Taoiseach and US president met. It featured step dancing, Irish music and poetry.

Mr and Mrs Trump travelled some 60km to the Trump International Golf Course at Doonbeg on Marine One, the US presidential helicopter.

There was much anticipation in the town ahead of the arrival of the president and his entourage. Mr Trump’s acting chief of staff enjoyed dinner in Morrissey’s pub in Doonbeg, owned by a distant relative of US vice-president Mike Pence, Hugh McNally. Mr Trump’s sons Eric and Donald jnr later visited the village and went to a number of bars - Morrissey’s, The Igoe Inn, Comerford’s, Tubridy’s and Madigan’s - where they bought drinks for local people.

Asked how his father felt about being back in Ireland, Don Jnr told The Irish Times: "He's here, isn't he?"

The Trumps flew to Shannon from Southampton having attended an event to mark the 75th anniversary of D-Day in Portsmouth, the final event of their three-day state visit to Britain.

They will return to Shannon Airport early on Thursday to fly to Caen in France to attend further events commemorating the end of the second World War. The Trumps are then due to return to Ireland in the afternoon.

Ireland’s ambassador to the United States Dan Mulhall, the Government’s special US envoy John Deasy, and Fianna Fáil Senator Mark Daly, who has a longtime interest in US affairs, are expected to attend a dinner hosted by White House chief of staff Mick Mulvaney on Thursday in Doonbeg.

A golf outing is anticipated on Friday morning before Mr Trump’s entourage leaves that afternoon.

Gardaí in Co Clare are not expecting any trouble to arise from the protests. Shannon gardaí are co-ordinating a large operation for the visit, with 1,500 uniformed officers on the ground, supported by 500 personnel from specialist units.

Chief Supt Michael Gubbins said the full cost of policing Mr Trump’s visit would be finalised after he departs.