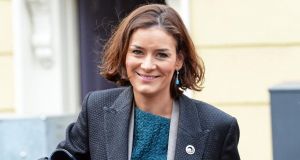 Dublin Bay South TD Kate O’Connell told a meeting of the Fine Gael parliamentary party that ordinary Irish people were not seeing changes in their insurance premiums despite promised action by the Government. Photograph: Eric Luke

A Fine Gael TD has told a private party meeting that ordinary Irish people are not seeing a change in their insurance premiums despite promised action by the Government.

At a meeting of the Fine Gael parliamentary party in Leinster House on Wednesday night, the Minister of State at the Department of Finance, Michael D’Arcy, updated TDs and senators on the cost of insurance and gave examples of progress including lower car insurance costs.

While some TDs agreed that the efforts of the Government were proving successful, Dublin Bay South TD Kate O’Connell is understood to have said “ordinary people and businesses” were not feeling this. A source said the comments were cordial while another said they represented a “grenade”.

“She basically said that at the end of the day there are claimants, medical people, legal people and insurance companies involved here and that people are being encouraged by professionals to claim. She was saying that Fine Gael is dealing with ordinary, normal people and businesses and they are not seeing these improvements in their premiums yet. I think she was saying this in terms of personal liability cases.”

Another source said she told the Minister “a national conversation is needed here”.

Another party member who attended the meeting said Mr D’Arcy had “outlined what the Government is doing and said if the judicial committee which is being set up, if the walls don’t come down on this, there will be legislation to cap awards so they are closer in line to UK payouts.”

The party has faced criticism over lack of action on rising insurance costs. It also was beset by controversy over a decision by party TD Maria Bailey to pursue, and later withdraw, a personal injuries claim over a fall from a swing in Dublin’s Dean Hotel.

Mr D’Arcy said in September that it is now up to the State’s judges to cut high insurance awards if insurers are to be encouraged back into the Irish market.

The chief justice, Mr Justice Frank Clarke, said last month he had identified members for a committee that would set guidelines for personal injury awards in the hope that they would be able to “hit the ground running” when the judicial council is set up.

The committee designate includes judges from the High Court and Court of Appeals, as well as from the district and circuit courts.

The Chief Justice said the members of the committee would be able to start work on benchmarking of personal injury awards against other jurisdictions, including the UK, where the Personal Injuries Commission found last year that the average soft-tissue award was a quarter of the Irish average of €17,338.