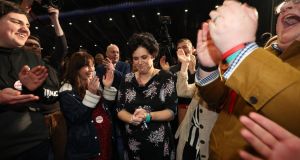 It was no shock that Claire Hanna won Belfast South for the SDLP, defeating the outgoing DUP MP Emma Little-Pengelly, but it was the scale of her victory that caused surprise.

Ms Little-Pengelly took the seat from the former SDLP leader Dr Alasdair McDonnell in 2017, winning by close to 2,000 votes.

Sinn Féin and the Greens pulled out of Belfast South to give Ms Hanna a better chance of taking the seat, but even had they entered the race she still would have won comfortably.

Ms Hanna is from strong SDLP stock. Both her parents were involved from the start of the civil-rights movement. Her mother, Carmel, was a minister in the Northern Ireland Executive, and her father, Eamon, is a former general secretary of the SDLP.

Michael Henderson of the Ulster Unionist Party, which held this seat until it was won by Dr McDonnell in 2005, won 1,259 votes while Chris McHugh of Aontú took 550 votes.

Ms Hanna, a Northern Ireland Assembly member for Belfast South, said there was no good form of Brexit. “We have many, many challenges ahead of us, but we do know that the relationships that we have to protect within Northern Ireland on an east-west basis and on a north-south basis have to be nurtured,” she said. “We will have to do that at Westminster, and hopefully we’ll be able to do it in a restored Executive.”

She said she and the SDLP leader, Colum Eastwood, would have an “uphill battle” in challenging the UK’s Conservative government, with its strong majority, on Brexit, but nonetheless that work would continue. “There is no issue bigger than Brexit,” she said at the count centre in the Titanic Exhibition Centre in Belfast.

Ms Hanna opposed the SDLP partnership with Fianna Fáil, resigning the party whip for a period in protest. Ahead of the election that whip was restored. She said she believed in pluralism and having as wide a relationship with other parties as possible. She urged the return of Stormont, saying that on the doorsteps that was the message all politicians got from voters.

Ms Little-Pengelly congratulated Ms Hanna on her victory. She said that right from the beginning of her election campaign she knew it would be a difficult challenge to win Belfast South, considering that it was such a pro-Remain constituency. In the referendum 70 per cent voted to stay in the European Union.

She said she was involved in politics because she genuinely believed in Northern Ireland and its people. “We can only work to make Northern Ireland better by working together, understanding each other through kindness and compassion. I know that by doing so we can genuinely make this a much better place to live, work and everything else in between.”

After speaking, Ms Little-Pengelly went over to Ms Hanna to congratulate and embrace her.