MP wins with majority of more than 12,000 in constituency held by a Paisley since 1970 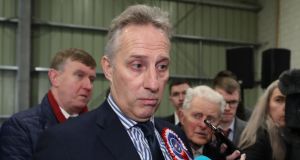 Ian Paisley jnr speaks to the media after his re-election as MP for North Antrim. Photograph: Niall Carson/PA Wire

It is not for nothing that North Antrim is known as Paisley country. A Paisley has held the seat since 1970; Ian Paisley jnr took over from his father, Ian Paisley snr, the North’s former first minister, in 2010; in the early hours of Friday morning Ian Paisley jnr was again declared the constituency’s MP.

This time he returned a majority of more than 12,000 votes, although, in keeping with the DUP’s performance across the board, Mr Paisley’s vote share was down from the 58.9 per cent he returned in the UK general election of 2017.

Still, by anybody’s reckoning the more than 47 per cent he polled this time around is a significant endorsement by the electorate, not least given the recall petition that Mr Paisley survived last year.

In 2018 he was suspended from the UK parliament amid controversy about two holidays paid for by the Sri Lankan government; he survived the petition, which failed to attract the signatures of the 10 per cent of constituents needed to force a byelection.

“Everything was done in the wider media to try and undermine me, but the electorate of North Antrim are incredibly faithful people,” said Mr Paisley. “The important thing is that the constituency gets things delivered for them.”

Beginning his victory speech with a few bars of a hymn, he also gave thanks to God for his victory and, like others, spoke of the need to restore the power-sharing Northern Ireland Assembly, at Stormont, not least in order to tackle the crisis in the health service that has led nurses and health workers to strike.

“As the father of a nurse,” he said, “I know what it is to see nurses overworked and underpaid. I think those messages about our health service have really struck home to every single public representative.”

On a poor night for the UUP elsewhere, the party’s former leader Robin Swann did better in North Antrim, polling 8,139 votes; the Alliance candidate, Patricia O’Lynn, was fewer than 2,000 votes behind and increased the party’s share of the vote in the constituency by 8.5 percentage points.