DUP deputy leader, who had held seat since 2001, loses to son of murdered solicitor 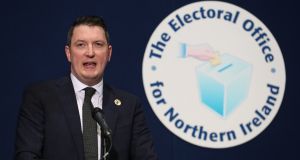 Sinn Féin’s John Finucane speaks after being declared the winner in the Belfast North constituency at the Titanic exhibition centre in Belfast in the early hours of Friday morning. Photograph: Liam McBurney/PA Wire

It was billed as the showdown battle of the Westminster election in Northern Ireland, and in the end Sinn Féin triumphed over the DUP, John Finucane taking the Belfast North seat from the DUP’s deputy leader, Nigel Dodds.

Two years ago Mr Dodds saw off the challenge from Mr Finucane, son of the murdered Belfast solicitor Pat Finucane, by more than 2,000 votes, but this time the Sinn Féin candidate turned the tables, winning by close to 2,000 votes.

It was the main seat targeted by Sinn Féin, the party putting in major resources to try to oust Mr Dodds; Sinn Féin members came in from safe constituencies to assist the North Belfast party campaigners.

The DUP, with support from loyalist supporters, mounted a strong rearguard defence but in the end was unable to withstand the power of the Sinn Féin machine.

Sinn Féin’s leader, Mary Lou McDonald, called it a “huge result, hugely significant” for her party. At the time she was speaking, at the count at the Titanic Exhibition Centre, in east Belfast, the Fermanagh and South Tyrone constituency and some others still had to be decided, but she said that Mr Finucane’s victory meant unionists had now lost their Northern Ireland majority at Westminster.

As Michelle Gildernew then went on to hold Fermanagh and South Tyrone – she beat Tom Elliott of the Ulster Unionist Party by just 57 votes after a recount – the DUP won a total of eight seats while the two nationalist parties, Sinn Féin and the SDLP, took nine between them, seven for Sinn Féin, two for the SDLP.

The result in Belfast was significant in other ways too. It meant for the first time three of the four seats in Belfast, once the virtual fiefdom of unionism, were now in nationalist hands: Sinn Féin held Belfast West and won Belfast North, and the SDLP took Belfast South; Belfast East is still in the hands of Gavin Robinson of the DUP.

Mr Finucane said the result was a “huge night for north Belfast”. He remembered his late father and paid tribute to his family and to his mother, Geraldine.

Referring to Brexit, he said, “I know this was an election that transcended party politics, and I know that I was very much the beneficiary of that today.”

“I said to those at the doors for the past six weeks that this election has the potential to be a voice that will be heard loud and clear, not just in North Belfast but in Belfast and Ireland and in Europe and, indeed, right across the world. And I think that message has been heard very loudly by everybody here tonight.”

Ms McDonald said the result in North Belfast strengthened the argument for a Border poll on a united Ireland. “The overall result confirms that unionism has lost its overall majority,” she said. “That is a huge challenge for all of us. We need to, in an orderly fashion, structure the conversation about a new Ireland and constitutional change.

“The two governments, particularly the government in Dublin, need to lead this. We are heading towards a Border poll. I can’t give you a definitive date. We need to do the spadework now and prepare ourselves,” she said.

“I don’t think unionism should be alarmed or frightened. This is a tremendous opportunity for everybody who lives on this island.”

Mr Dodds said he was proud of his role in delivering for North Belfast in areas such as mental health, housing, jobs and the economy, and although Mr Finucane had not acknowledged that contribution in his speech he congratulated Mr Finucane on his victory. “I do regret the fact that North Belfast, however, will be left unrepresented in the House of Commons at a very challenging time,” he said.

“One of the messages of this election is that people want to have their voice heard in Westminster at a critical time, when there are so many challenges for North Belfast, for Northern Ireland and for our country as a whole.”

Mr Dodds said it was very clear now that Brexit is going to happen. It was very important that the Northern Assembly was reinstated as quickly as possible so that Northern politicians could have a role in that exit from the EU.

And repeating his opposition to Mr Johnson’s Brexit deal because it would mean, as the DUP insists, a border down the Irish Sea, Mr Dodds added, “Boris Johnson needs to understand that we must have a Brexit that ensures that it protects the integrity of the United Kingdom, and is the best deal for Northern Ireland. That is something we will continue to work with the [British] government on in the days ahead.”

Mr Dodds also made clear that he was not withdrawing from politics. “I look forward to continuing to serve in whatever capacity people see fit going forward.”

The DUP leader, Arlene Foster, said, “I am very disappointed, not just for North Belfast but for Northern Ireland, that they’re losing such a great advocate in Nigel Dodds.”