Constituency that has swung back and forth between parties gives Girvan 2,000-vote win 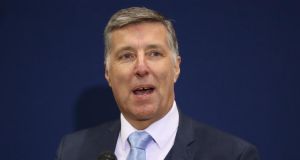 If the UUP had a chance of retaking any of Northern Ireland’s 18 Westminster constituencies, so the election predictions went, it would be in Fermanagh and South Tyrone or in South Antrim. In the southwest Tom Elliott ran it close, losing out to Michelle Gildernew of Sinn Féin by a handful of votes. It was not so close in South Antrim, where Paul Girvan of the DUP took the seat with a comfortable margin of more than 2,000 ahead of the UUP’s Danny Kinahan.

South Antrim has swung back and forth between the DUP and the UUP in recent years; Kinahan was the constituency’s MP from 2015 to 2017, and Girvan’s winning margin of just over 3,000 votes last time around was, in theory, not out of reach for Kinahan – not least given his status as a prominent Remainer. In the event he narrowed the gap, but not sufficiently to give Girvan much cause for concern.

On the podium at the count centre in Magherafelt, Co Derry, Girvan said he was “very honoured to have been given the opportunity to represent South Antrim yet again in Westminster”. He paraphrased Winston Churchill to praise his election team. “Never was so much done by so few for so little,” he joked.

The surge that took the Alliance Party to overall third place in Northern Ireland, with about 17 per cent of the vote, was also in evidence in South Antrim. The Alliance candidate, John Blair, took the party’s tally to 8,190 votes, more than double its total in 2017.

Dublin city activists push for a blank canvass on climate