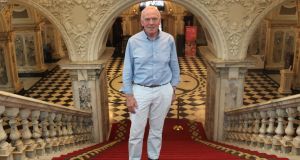 Brexit has put the future of the United Kingdom in jeopardy and left unionists fearing a Border poll would be a “slippery slope” to a united Ireland, a loyalist politician has said.

John Kyle, the Progressive Unionist Party councillor in Belfast, said that Brexit has been “very damaging to the stability of Northern Ireland”, unsettling nationalists who “felt comfortable” being in the European Union and who were concerned now about barriers to travelling freely across the Border.

“You’ve got increased unrest in Scotland and in Northern Ireland, with a cause for a Border poll. For unionists, they view a Border poll as an inevitable downward slide, [a] slippery slope,” Mr Kyle said.

A 51 per cent vote for a united Ireland would be as disruptive to the social fabric on the island of Ireland as Brexit has been in the UK, he said, but unionists and loyalists still needed to have some constructive conversations about it.

“It is sort of head in the sand, ostrich approach not to do it. It is like planning for a no-deal Brexit. It doesn’t mean it’s going to happen, but I think it’s foolish not to plan for it,” he said.

The retired GP, who is applying for an Irish passport, said that unionists and loyalists were very pragmatic about applying for them if it meant greater freedom of movement and travel after Brexit.

“Forty years ago, the people on the Shankill Road would never have been south of Newcastle [in Co Down]. But now people go down [to Dublin] to see Bruce Springsteen. I don’t think it’s a big deal,” he said.

Mr Kyle, who became a councillor in 2007 after the death of PUP leader David Ervine, dismissed graffiti in loyalist east Belfast directed at him this week that stated: “A vote for John Kyle is a vote for the IRA.”

The writing appeared on a wall after he supported Belfast City Council’s decision to remove tyres from a bonfire prepared for the July 12th commemorations, the annual Ulster Protestant celebration, due to health concerns over the toxic fumes. He had questioned how someone’s unionism or Britishness could be diluted by taking tyres from a bonfire.

“That is a local difficulty. Let’s not overreact. Let’s try and get ourselves through this with a minimum of damage,” he said.