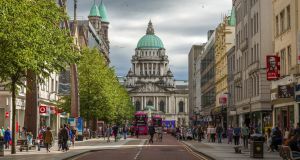 Belfast city centre. There could be a decline of between £100 million to £180 million in exports to the Republic in the event of a no-deal Brexit

At least 40,000 jobs would be at risk in the North from a no-deal Brexit, according to a new report from the Northern Ireland civil service.

It warns that the decision to leave the European Union without a deal would have a “profound and long-lasting” impact on the North’s economy and society. This includes a rise in smuggling in border counties and pressure on businesses from organised crime groups.

The analysis concludes that a no deal would have “immediate and severe” consequences for the North’s competitiveness in the all-island economy and its place in the UK internal market.

However, despite this, the report concludes that the majority of companies in Northern Ireland have not ‘Brexit-proofed’ their businesses sufficiently with the locally economy likely to be poorly positioned to absorb the shocks associated with a no-deal.

Overll, the study forecasts that businesses exporting services to the Republic would face an average increase in the cost of doing business of 14.5 percentage points.

The analysis also indicates that businesses in the North would have increased vulnerability to low cost non-EU imports, with the agri-food sector particularly at risk.

“’No deal’ therefore places a twin pressure on NI’s access to the EU and UK markets, leaving businesses with very limited options and the NI economy facing an absolute reduction in exports and external sales,” it says.

“The impact of EU tariffs and non-tariff barriers will mean that whatever the Irish Government or the EU may do or not do, many businesses will no longer be able to export to the Irish market,” the report adds.

Under a ‘no deal’ exit, NI’s foreign direct investment (FDI) attractiveness will also slump by as much as 6 per cent a year in the number of projects and 7.6 per cent in related jobs. Tourism is also likely to be negatively impacted, the study forecasts.

While lower prices on goods is likely in Britain, the analysis warns that consumers in the North will likely not benefit from this as most items are sourced from further afield.