McHugh to bring memo on abuse scheme to Cabinet next week

‘We failed as a State and as a society,’ education minister Joe McHugh tells Dáil 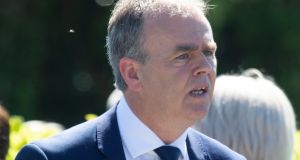 Minister for Education Joe McHugh is expected to bring a memo to Cabinet next week outlining the Government’s plans to deal with the ex-gratia scheme for people sexually abused in day schools. Photograph: Joe Boland/PA Wire

Minister for Education Joe McHugh is expected to bring a memo to Cabinet next week outlining the Government’s plans to deal with the ex-gratia scheme for people sexually abused in day schools.

He was speaking in a debate on the ruling by Mr Justice Iarfhlaith O’Neill that the State misinterpreted a ruling by the European Court of Human Rights in the case taken by Cork woman Louise O’Keeffe.

The State’s interpretation denied applicants access to a redress scheme to which they were entitled, the Judge ruled.

Mr McHugh told the Dáil: “There is no question about what went wrong. There is no justification in my standing up on behalf of the State to say we tried our best but failed. That is what happened. We failed as a State and as a society.”

On Tuesday Taoiseach Leo Varadkar apologised on behalf of the State to victims of child sexual abuse in day schools and said the requirement that an applicant prove a prior complaint was made against their abuser would be removed.

In 2017 then minister for education Richard Bruton appointed Mr Justice O’Neill to review cases that were deemed ineligible for redress by the State Claims Agency.

Mr McHugh said “I am happy with the work of Mr Justice Iarfhlaith O’Neill and I am disappointed that it took two years. We have all these disappointments but it is what we do next to ensure we get it right that counts.”

The Minister said that close to half the applicants for the scheme appealed their case to the Judge and of 19 cases payment is due in 13.

Fianna Fáil Limerick TD Willie O’Dea highlighted the statute of limitations as a barrier to many victims, who were obliged to start proceedings within a certain time limit.

Many survivors of abuse were not in a position financially or psychologically to take a case and were told that they would have no case, prior to the ruling of the European Court.

Sinn Féin Limerick TD Maurice Quinlivan asked if the advice requiring a prior complaint was a political or legal decision and he sought the publication of the advice the Department received that led to this condition being introduced. He called for a telephone line to be established for those affected and asked for confirmation that victims would not be subject to the statute of limitations.

Labour TD Willie Penrose said the prior complaint criteria as “an impossible condition set that no one could meet”.

He said the State employed a legal fiction to escape liability and the “legal gymnastics” had to end. Mr Penrose added that compensating the victims would cost €29 million “equivalent to one fiftieth or 2 per cent of the costs of the indemnity given to religious orders for institutional abuse”.