Canvassers get cold reception over vote on ‘silly’ blasphemy rule 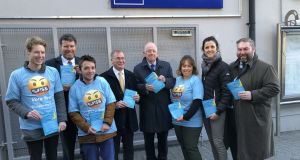 Minister for Justice Charlie Flanagan, three Senators, and a few eager Young Fine Gael members turned up for a canvass outside Dublin’s Tara Street train station to call for a Yes vote in the upcoming referendum on blasphemy.

The vote on whether to remove the offence of blasphemy from the Constitution, to be held in conjunction with the presidential election on October 26th, has garnered little attention to date.

Similarly most commuters appeared uninterested, brushing past the canvassers on their way to work on the cold Thursday morning.

The leaflets that canvassers were handing out told a story themselves, the front of the party literature called for a No 1 vote for President Michael D Higgins, with a note advocating for a Yes vote in the ballot on blasphemy relegated to the back.

One commuter dived around a sandwich board to sidestep the canvassing entourage, perhaps fearful those bearing leaflets were seeking to proselytise him, or cajole him into setting up a monthly donation to a charitable cause.

Fine Gael Senator Anthony Lawlor began to get a better reception after switching tack from the blasphemy vote, to calling for passers-by to vote for President Higgins.

Speaking to media, Mr Flanagan said the reference to blasphemy in the Constitution was not consistent with “freedom of expression and of speech.”

Mr Flanagan rejected suggestions the Government had not done enough to engage people on the referendum, ahead of the vote. “There’s eight days to go in the campaign, we’re actively engaged in informing the people of the question at hand and then asking them to vote Yes”, he said.

Lauren Lee Barrett (19) was one early morning commuter coming out of Tara St Dart station, who said she was aware of the upcoming vote on blasphemy.

“I just didn’t understand whether it was to take it out [of the Constitution], or put it in. I wasn’t really clear on what the thing was around,” she said.

Ms Lee Barrett, a National College of Art and Design student, said she supported a Yes vote to remove the reference to blasphemy. “It’s so silly that it’s in there in the first place,” she said.